The Ashes of London (Paperback) 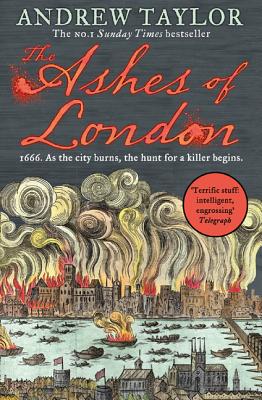 The Ashes of London (Paperback)


Recently On Our Shelves
The first book in the No. 1 Times bestselling series

'This is terrific stuff' Daily Telegraph

'A breathtakingly ambitious picture of an era' Financial Times

A CITY IN FLAMES
London, 1666. As the Great Fire consumes everything in its path, the body of a man is found in the ruins of St Paul's Cathedral - stabbed in the neck, thumbs tied behind his back.

A WOMAN ON THE RUN
The son of a traitor, James Marwood is forced to hunt the killer through the city's devastated streets. There he encounters a determined young woman, who will stop at nothing to secure her freedom.

A KILLER SEEKING REVENGE
When a second murder victim is discovered in the Fleet Ditch, Marwood is drawn into the political and religious intrigue of Westminster - and across the path of a killer with nothing to lose...

Andrew Taylor is the author of a number of crime novels, including the ground-breaking Roth Trilogy, which was adapted into the acclaimed TV drama Fallen Angel, and the historical crime novels The Silent Boy, The Scent of Death and The American Boy, a No.1 Sunday Times bestseller and a 2005 Richard & Judy Book Club Choice.He has won many awards, including the CWA John Creasey New Blood Dagger, an Edgar Scroll from the Mystery Writers of America, the CWA Ellis Peters Historical Award (the only author to win it three times) and the CWA's prestigious Diamond Dagger, awarded for sustained excellence in crime writing. He also writes for the Spectator.He lives with his wife Caroline in the Forest of Dean.