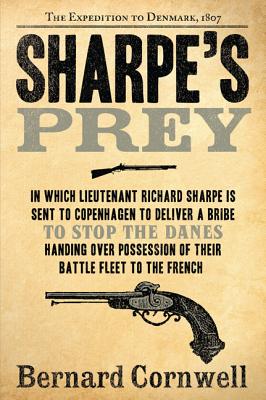 By Bernard Cornwell
$16.99
Coming from our Warehouse. Ships in 1-5 Days

This is book number 5 in the Sharpe series.

Critically acclaimed, perennial New York Times bestselling author Bernard Cornwell (Agincourt, The Fort, the Saxon Tales) makes real history come alive in his breathtaking historical fiction. Praised as "the direct heir to Patrick O'Brian" (Agincourt, The Fort), Cornwell has brilliantly captured the fury, chaos, and excitement of battle as few writers have ever done—perhaps most vividly in his phenomenally popular novels following the illustrious military career of British Army officer Richard Sharpe during the late 18th and early 19th centuries. In Sharpe's Prey, Sharpe must prove his mettle once again after performing courageously on Wellesley's battlefields in India and the Iberian Peninsula, as he undertakes a secret mission to Copenhagen, Denmark in 1807 to prevent a resurgent Napoleon from capturing the Danish fleet. Perhaps the San Francisco Chronicle said it best: "If only all history lessons could be as vibrant."