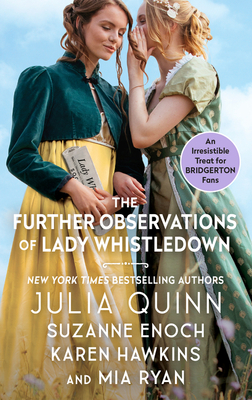 Society is abuzz when the Season’s most promising debutante is jilted by her intended—only to be swept away by the deceitful rogue’s dashing old brother—in New York Times bestseller Julia Quinn’s witty, charming, and heartfelt tale.

When the scandalous actions of his beautiful fiancée are recorded in Lady Whistledown’s column, a concerned groom-to-be rushes back to London to win his lady’s heart once and forever, in Suzanne Enoch’s enchanting romantic gem.

Karen Hawkins captivates with an enduring story of a handsome rogue whose lifelong friendship—and his heart—are tested when the lovely lady in question sets her cap for someone else.

A dazzling and delightful tale by Mia Ryan has a young woman cast out of her home by an insufferable yet charming marquis—who intends to take possession not only of the house . . . but its former occupant as well!

A native and current resident of Southern California, Suzanne Enoch loves movies almost as much as she loves books. When she is not busily working on her next novel, Suzanne likes to contemplate interesting phenomena, like how the three guppies in her aquarium became 161 guppies in five months.

Karen Hawkins was raised in Tennessee, a member of a huge extended family that included her brother and sister, an adopted sister, numerous foster siblings, and various exchange students. In order to escape the chaos (and while hiding when it was her turn to do the dishes), she would huddle under the comforter on her bed with a flashlight and a book, a habit she still embraces to this day.

When not carpooling, scraping gum off seatbelts, doing laundry and staring insanity in the face, Mia Ryan likes to escape into her writing. You can also read Mia Ryan's "A Dozen Kisses" in The Further Observations of Lady Whistledown, an Avon book published in February 2003.

“[A] rewarding Regency-era anthology . . . these Regency bonbons are filled with the wit and charm that mark the authors’ full-length novels, yet they still contain enough passion to keep wintry readers warm. A wonderful introduction to the contributors’ work, this is a perfect Valentine for romance readers.”
— Publishers Weekly