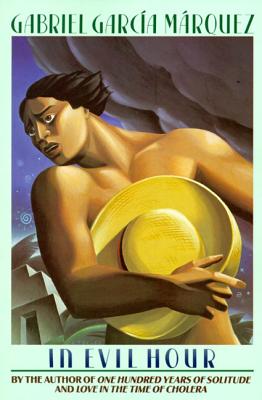 "An openly political novel posing the people of the land against the forces of oppression. . . it has the virtues of wit and compassion and reveals the foundation upon which the later novels were constructed." —Jonathan Yardley, Washington Post Book World

The thrilling story about the smears, defamations, infidelities, and torrential rains that afflict a small Colombian small town and the sacrifice of a boy that brings torment and chaos to an end, from the masterful Gabriel Garcia Marquez, author of One Hundred Years of Solitude and Love in the Time of Cholera.

One morning slanderous posters start appearing all over the town, revealing family secrets and maligning individuals. Ghosts of the past reappear, along with old feuds and infidelities. Torrential rains then flood the town and chaos is everywhere. Neighbors suspect each other yet no one knows who is responsible. Finally, a boy is made the scapegoat and tragedy ensues.

In Evil Hour contains vivid characters who reflect the humor and pathos of everyday life. This brooding novel clearly points the way to the flowering of Garcia Marquez’s genius in his later One Hundred Years of Solitude.

Gabriel García Márquez was born in 1927 in the town of Aracataca, Columbia.Latin America's preeminent man of letters, he was awarded the Nobel Prize in Literature in 1982. García Márquez began his writing career as a journalist and is the author of numerous other works of fiction and nonfiction, including the novels The Autumn of the Patriarch and Love in the Time of Cholera, and the autobiography Living to Tell the Tale. There has been resounding acclaim for his life's work since he passed away in April 2014.

"An openly political novel posing the people of the land against the forces of oppression. . . it has the virtues of wit and compassion and reveals the foundation upon which the later novels were constructed."
— Jonathan Yardley, Washington Post Book World

"One Hundred Years of Solitude is just around the rain-drenched corner."
— Boston Globe

"More than a prelude. . . the dazzling sense of place, the colorful idiosyncrasy of character are present for us to marvel over once again."
— The New Republic