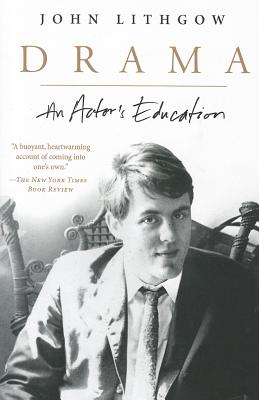 "A memoir as finely crafted as one of Lithgow’s performances."
—Steve Martin

Emmy Award-winner John Lithgow presents a charming, witty, and revealing memoir about his family, his work, and his life in Drama—an intimate story of insights and inspirational reflections from one of America’s most beloved actors. Lithgow pays tribute to his father, his greatest influence, and relives his collaborations with renowned performers and directors including Mike Nichols, Bob Fosse, Liv Ullmann, Meryl Streep, and Brian De Palma. A compelling reflection on the trials, triumphs, and changes across his long career, Lithgow’s Drama illuminates the inner life of a celebrated talent, and points the way forward for anyone aspiring to greatness in their own life.

John Lithgow is an award-winning actor who has starred on stage, film, and television. A New York Times bestselling author of eight books for children, he lives in New York and Los Angeles.

“Drama is a cut above—touching, self-aware, and beautifully written.”
— People

“Warm and generous.  . . . Lithgow is relentlessly likable.  . . . A brisk book, packed with funny stories.  . . . A buoyant, heartwarming account of coming into one’s own.”
— The New York Times Book Review

“Anyone interested in an actor’s life—especially backstage—will find this book enlightening.”
— USA Today

“A memoir as finely crafted as one of Lithgow’s performances. Lithgow tells of transgressions, indiscretions, and a tabloid-worthy affair that my PR people could only have wished for. An exciting and revealing book, and what’s more, it’s about ACTING!”
— Steve Martin

“John Lithgow’s memoir is more than an insider’s view of his craft. The portrait of his father is as finely articulated as it is heartfelt, and the account of the young actor’s struggles with his too-young, too-early first marriage is both moving and candid. I loved this book.”
— John Irving

“This book has all the drama we’ve come to expect from John Lithgow, the alternately dark, tender, romantic, dangerous, deranged actor we find in Drama, which is also a family tale of the richest variety. A great read.”
— Mary Karr

“John Lithgow’s memoir is both unflinching and irresistible. It captures the long, hard road to the stage for any actor, or for virtually anyone trying to make it in New York, and shows how putting all of your hopes into the one thing you love isn’t so crazy after all.”
— Gay Talese

“Drama recounts in graceful, considered prose a life that after a few wrong turns is now happier and more well adjusted than most.”-
— Charles McGrath, The New York Times

“Lithgow rises to the occasion with courageous honesty and fairness.  . . . There’s something breath-catchingly poignant in the simple, hard-won wisdom he imparts before taking his final bow: ‘Acting is pretty great. But it isn’t everything.’”
— The Los Angeles Times

“John Lithgow’s memoir, Drama, reminded me that the world is indeed all a stage and that professionals have some great ideas about how to perform on it.”
— Drew Gilpin Faust, The Wall Street Journal