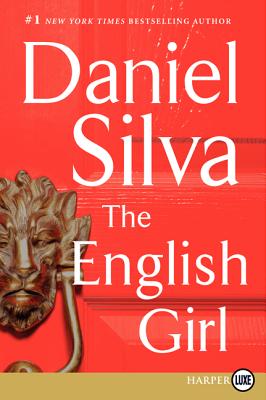 By Daniel Silva
$30.79
Not Available - Possibly Out of Print

This is book number 13 in the Gabriel Allon series.

Daniel Silva delivers another spectacular thriller starring Gabriel Allon, The English Girl. When a beautiful young British woman vanishes on the island of Corsica, a prime minister’s career is threatened with destruction. Allon, the wayward son of Israeli intelligence, is thrust into a game of shadows where nothing is what it seems...and where the only thing more dangerous than his enemies might be the truth…

Silva’s work has captured the imagination of millions worldwide; his #1 New York Times bestselling series which chronicles the adventures of art-restorer and master spy Gabriel Allon has earned the praise of readers and reviewers everywhere. This captivating new page-turner from the undisputed master of spy fiction is sure to thrill new and old fans alike.

“This is thriller writing at the highest level, offering up a tight plot, believable characters, and an ending that even the most jaded of readers probably won’t see coming.”
— Denver Post

“As usual, Silva takes the reader hostage from page one with his canny mix of spy craft and suspense….Silva’s ongoing ability to combine le Carré-like texture with high energy plotting has produced a string of commercial and critical successes. Chalk up another one.”
— Booklist

“Allon is a great political operative, but Silva is an even greater writer. That is what makes THE ENGLISH GIRL a must read.”
— HuffingtonPost.com

“Although Gabriel’s adventures are set in the real world of greedy politicians and grabs for control of a diminishing supply of natural resources, ‘Israel’s avenging angel’ has the superhuman abilities that make for a satisfying fantasy.”
— Columbus Dispatch

“Someone once said that their favorite books are ones that entertain and inform at the same time. The English Girl is one of those novels….A top-notch, old-fashioned East-meets-West, cloak-and-dagger thriller.”
— Bookreporter.com

“[Silva’s] 13 Gabriel Allon novels have both entertained and informed tens of millions of readers about the realities of world in which we live more than any other writer over the past decade…. You will read the book in at most a couple of sittings.”
— The National Examiner

“One of the more unusual literary spies is Gabriel Allon, an Israeli intelligence officer who wants to retire so he can continue as an artist restoring damaged master artworks. But life interferes, and thank goodness, because otherwise we wouldn’t have such great novels from Daniel Silva.”
— Lincoln Journal Star

“Spectacular....This captivating new page-turner from the undisputed master of spy fiction is sure to thrill new and old fans alike.”
— D.C. Spotlight