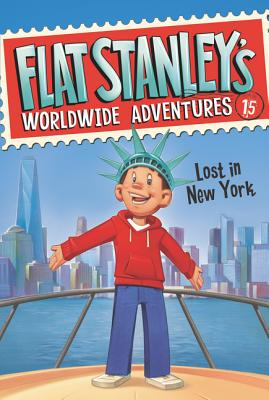 Flat Stanley is taking over the world, one city at a time! In this thrilling fifteenth book in the renowned Flat Stanley’s Worldwide Adventures chapter book series, the Lambchops visit the Big Apple, New York City!

Stanley Lambchop has been invited to New York City to take part in an International Declaration of Friendship at the United Nations! But before anyone signs the declaration, the group goes on a whirlwind tour of New York City.

What should be an adventure quickly turns scary when Stanley and his new friend Ian get separated from their group. But Stanley and Ian manage to find the fun in their situation, traveling around Manhattan: through the subway, across Times Square, and—finally—to the top of the Empire State Building.

But at the end of the day, Stanley and Ian are still on the search to find their families and friends before it’s time to sign the Declaration of Friendship. Will they meet up with their group before it’s too late?

This unforgettable adventure features fun, fascinating facts about New York City! And for parents and teachers, each Flat Stanley book is aligned to the Common Core State Standards, like multicultural adventure, plot and character development story elements, and compare and contrast! Don’t miss any of Flat Stanley’s worldwide adventures!