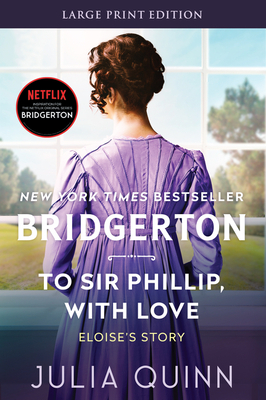 By Julia Quinn
$21.99
Available to Order from Our Warehouse

This is book number 5 in the Bridgertons series.

From #1 New York Times bestselling author Julia Quinn comes the story of Eloise Bridgerton, in the fifth of her beloved Regency-set novels featuring the charming, powerful Bridgerton family, now a series created by Shondaland for Netflix.

Sir Phillip knew that Eloise Bridgerton was a spinster, and so he’d proposed, figuring that she’d be homely and unassuming, and more than a little desperate for an offer of marriage. Except . . . she wasn’t. The beautiful woman on his doorstep was anything but quiet, and when she stopped talking long enough to close her mouth, all he wanted to do was kiss her . . . and more.

Did he think she was mad? Eloise Bridgerton couldn’t marry a man she had never met! But then she started thinking . . . and wondering . . . and before she knew it, she was in a hired carriage in the middle of the night, on her way to meet the man she hoped might be her perfect match. Except . . . he wasn’t. Her perfect husband wouldn’t be so moody and ill-mannered, and while Phillip was certainly handsome, he was a large brute of a man, rough and rugged, and totally unlike the London gentlemen vying for her hand. But when he smiled . . . and when he kissed her . . . the rest of the world simply fell away, and she couldn’t help but wonder . . . could this imperfect man be perfect for her?

With tens of millions of copies in print, #1 New York Times bestselling author Julia Quinn has been called “Smart, funny,” by TIME Magazine. Her novels have been translated into 35 languages and are beloved the world over. A graduate of Harvard and Radcliffe Colleges, she lives with her family in the Pacific Northwest.

Look for Bridgerton, based on her popular series of novels about the Bridgerton family, on Netflix.