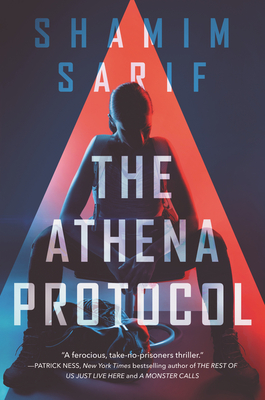 Jessie Archer is a member of the Athena Protocol, an elite organization of female spies who enact vigilante justice around the world.

Athena operatives are never supposed to shoot to kill—so when Jessie can’t stop herself from pulling the trigger, she gets kicked out of the organization, right before a huge mission to take down a human trafficker in Belgrade.

Jessie needs to right her wrong and prove herself, so she starts her own investigation into the trafficking. But going rogue means she has no one to watch her back as she delves into the horrors she uncovers. Meanwhile, her former teammates have been ordered to bring her down. Jessie must face danger from all sides if she’s to complete her mission—and survive.

Shamim Sarif is a novelist, screenwriter, and director. She lives in London with her wife, Hanan, and their two sons. The Athena Protocol is her first novel for teens. Visit her online at www.enlightenment-productions.com.

“Imagine if Mission: Impossible were run by young, brilliant, ultra-skilled female operatives who undertook rogue operations to save the women and girls of the world from kidnappers and traffickers. Shamim Sarif has written a ferocious, take-no-prisoners thriller that actually thrills, with a deep heart and characters you’ll adore. What a wonderful and exciting new voice in YA. More please!” — Patrick Ness, New York Times bestselling author of The Rest of Us Just Live Here and A Monster Calls

&#8220Finally! The female version of James Bond we’ve been waiting for! Only better—this team of black-ops spies exclusively kick ass and take the names of those who prey on women and girls: warlords and human traffickers. With a diverse cast of heroes and villains, a global scope, and just a hint of romance, it makes taking down the patriarchy fun.” — Natalie C. Anderson, author of City of Saints and Thieves

“Led by and centered on women, this high-octane thriller features a well-developed cast with distinct, varied backgrounds. An explosively exciting story that shines a light on the treatment, mistreatment, and unity of women across the globe.” — ALA Booklist

"Delivers all the fun of a spy thriller. The reveals are well plotted and the characters have developed (and often clashing) personalities. Solutions for world problems are also realistically approached, as taking down one baddie leaves a lot unresolved and a lot to ponder about the way crises like terrorism are approached worldwide. Readers looking for some heart-pumping action and vigilante justice will find it here aplenty."
— Bulletin of the Center for Children’s Books