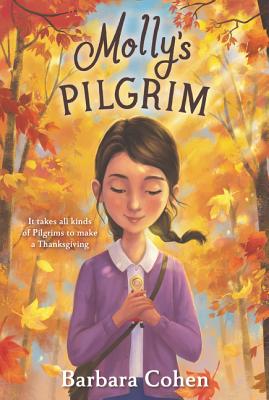 By Barbara Cohen, Jennifer Bricking (Illustrator)
$4.99
On Our Shelves Now

A modern Thanksgiving classic about an immigrant girl who comes to identify with the story of the Pilgrims, as she seeks religious freedom and a home in a new land. Now with a gorgeous new cover and lovely interior illustrations.

As Molly nears her first Thanksgiving in the New World, she doesn't find much to be thankful for. Her classmates giggle at her accent and make fun of her unfamiliarity with American ways.

And Molly’s mother only makes things worse when she creates a doll for a school Thanksgiving project that looks more like a Russian refugee than a New England Pilgrim. But the tiny modern-day pilgrim just might help Molly to find a place for herself in America.

The touching story tells how recent immigrant Molly leads her third-grade class to discover that it takes all kinds of pilgrims to make a Thanksgiving. Originally published in 1983, Molly's Pilgrim inspired the 1986 Academy Award-winning live-action short film.

Barbara Cohen (1932-1992) was the author of several acclaimed picture books and novels for young readers, including The Carp in the Bathtub, Yussel's Prayer: A Yom Kippur Story, Thank You, Jackie Robinson, and King of the Seventh Grade.