Universe of Two: A Novel (Paperback) 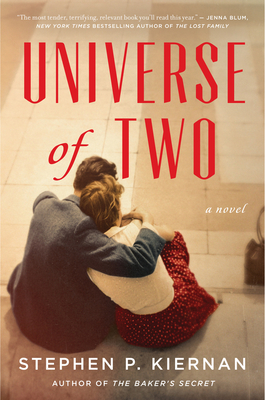 Universe of Two: A Novel (Paperback)

“Stephen Kiernan has pulled off the nearly impossible...The most tender, terrifying, relevant book you’ll read this year.” — Jenna Blum, New York Times bestselling author of Those Who Save Us and The Lost Family

From the critically acclaimed author of The Baker’s Secret and The Curiosity comes a novel of conscience, love, and redemption—a fascinating fictionalized account of the life of Charlie Fisk, a gifted mathematician who was drafted into Manhattan Project and ordered against his morals to build the detonator for the atomic bomb. With his musician wife, he spends his postwar life seeking redemption—and they find it together.

Graduating from Harvard at the height of World War II, brilliant mathematician Charlie Fish is assigned to the Manhattan Project. Working with some of the age’s greatest scientific minds, including J. Robert Oppenheimer, Enrico Fermi, and Leo Szilard, Charlie is assigned the task of designing and building the detonator of the atomic bomb.

As he performs that work Charlie suffers a crisis of conscience, which his wife, Brenda—unaware of the true nature of Charlie’s top-secret task—mistakes as self-doubt. She urges him to set aside his qualms and continue. Once the bombs strike Hiroshima and Nagasaki, the feelings of culpability devastate him and Brenda.

At the war’s end, Charlie receives a scholarship to pursue a PhD in physics at Stanford—an opportunity he and Brenda hope will allow them a fresh start. But the past proves inescapable. All any of his new colleagues can talk about is the bomb, and what greater atomic weapons might be on the horizon. Haunted by guilt, Charlie and Brenda leave Stanford and decide to dedicate the rest of their lives to making amends for the evil he helped to birth into the world.

Based on the life of the actual mathematician Charles B. Fisk, Universe of Two combines riveting historical drama with a poignant love story. Stephen Kiernan has conjured a remarkable account of two people struggling to heal their consciences and find peace in a world forever changed.

Stephen P. Kiernan has won numerous awards, including the Brechner Center’s Freedom of Information Award, the Scripps Howard Award for Distinguished Service to the First Amendment, and the George Polk Award. He is the author of two previous novels, The Curiosity and The Hummingbird, and two nonfiction books. He lives in Vermont with his two sons.

“Stephen Kiernan has pulled off the nearly impossible, reminding us by wrapping a war story in a love story that although we hold the power for our own extinction, we also have the power to redeem, heal, and save. The most tender, terrifying, relevant book you’ll read this year.” — Jenna Blum, New York Times bestselling author of Those Who Save Us and The Lost Family

“Rarely does historical fiction get everything so right as Universe of Two: compelling characters, faithful detail, a story packed with unexpected twists, and a sure, authentic voice that never wavers. In this novel of the dawn of the atomic age and its profound consequences, Stephen Kiernan leads us along a journey of conscience as complex and infinite as the science itself.”  — Beatriz Williams, New York Times bestselling author of The Golden Hour

“Based loosely on the life of mathematician and organ-maker Charles B. Fisk, this fascinating novel delves into the guilt and remorse that wracked him for his part in the development of the atomic bomb. . . . The two main characters are complex and flawed, but when they come together, their world is in harmony.”
— Library Journal

“Kiernan recreates the zeitgeist of America leading up to the atomic bomb on a national and personal level: the eager anticipation of wartime’s end, the grimly fascinating science, and the growing sense of guilt and dread. Simultaneously tender and hard-hitting, this riveting story offers much to reflect upon.” — Booklist

"Charlie and Brenda's choices imply that harmony (in music and in love) can be every bit as powerful as splitting the atom. It's a history lesson contemporary leaders would do well to remember." — Seven Days