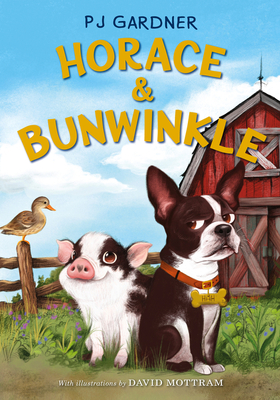 This is book number 1 in the Horace & Bunwinkle series.

The first in a young middle grade animal series in which an anxious Boston Terrier and an exuberant potbellied pig team up to solve crimes in their barnyard—from debut author PJ Gardner, with illustrations by David Mottram.

Perfect for fans of the Mercy Watson series, The Trouble with Chickens, and A Boy Called Bat.

Horace Homer Higgins III despises dirt. And the outdoors. And ducks. But when his person, Ellie, moves to a farm called the Homestead, the anxious Boston Terrier is forced to adapt. As if that isn’t enough to strain his nerves, Ellie adopts a perpetually cheerful potbellied pig named Bunwinkle to be his baby sister.

Bunwinkle is delighted to be on the farm despite the stuffiness of her new canine brother. She’s sure she’ll crack his shell eventually—no one can resist her cuteness for long—especially once they bond over watching a TV pet-tective show.

When the duo discovers that some neighborhood animals have been disappearing, they decide to use their new detective skills to team up to solve this barnyard mystery. Is it a mountain lion? Or their suspiciously shot-loving veterinarians? Only one thing seems certain: if they don’t figure it out soon, one of them might be next.

PJ Gardner is the author of the middle grade Horace & Bunwinkle series. She lives in Southern California with her husband and sons, as well as her Boston Terriers, Rosie and Rocky. Visit her at pjgardnerswitzer.com.

“Gardner’s debut tale of mystery and (eventual) bucolic bliss brings to mind Joan Carris and Noah Z. Jones’ Bed & Biscuit series. Graduates of the Mercy Watson books will also feel right at home. Mottram’s occasional illustrations just add to the charm….This kicks off a series, and readers will be glad to know that this piggie and pooch will pair up again.” — Kirkus Reviews

"I know a thing or two about animals who investigate mysteries, and Horace and Bunwinkle have what it takes, doing so with pluck and charm. Kids will be delighted by the curiosity and caring natures of these adorable, adoptive, crime-solving siblings!" — John Patrick Green, New York Times-bestselling writer and artist of InvestiGators

“Horace and Bunwinkle are a delightful pair. Sweet and funny, their antics will keep young readers eagerly turning the page.” — Suzanne Selfors, bestselling author of Wedgie & Gizmo and The Imaginary Veterinary Series