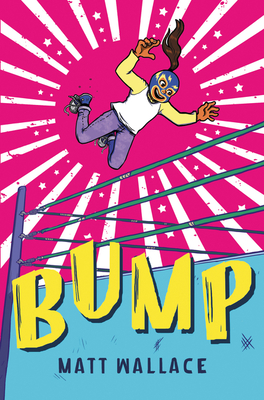 By Matt Wallace
$16.99
Recently On Our Shelves

A moving and triumphant middle grade contemporary debut from award-winning author Matt Wallace about a heroic young girl—who dreams of becoming a pro wrestler—learning to find courage and fight for what she loves. Perfect for fans of Kelly Yang, Meg Medina, and Jason Reynolds' Track series!

MJ knows what it means to hurt. Bruises from gymnastics heal, but big hurts—like her dad not being around anymore—don’t go away. Now her mom needs to work two jobs, and MJ doesn’t have friends at school to lean on.

There is only one thing MJ loves: the world of professional wrestling. She especially idolizes the luchadores and the stories they tell in the ring. When MJ learns that her neighbor, Mr. Arellano, runs a wrestling school, she has a new mission in life: join the school, train hard, and become a wrestler.

But trouble lies ahead. After wrestling in a showcase event, MJ attracts the attention of Mr. Arellano’s enemy at the State Athletic Commission. There are threats to shut the school down, putting MJ’s new home—and the community that welcomed her—at risk. What can MJ do to save her new family?

Matt Wallace is the Hugo Award–winning author of Rencor: Life in Grudge City, the Sin du Jour series, and Savage Legion. He’s also penned over one hundred short stories in addition to writing for film and television. In his youth he traveled the world as a professional wrestler and unarmed combat and self-defense instructor before retiring to write full-time. He lives in Los Angeles with his wife, Nikki. You can visit him at www.matt-wallace.com.

“My favorite books have two things: A world I’ve never seen before and a great character to experience it with. Bump delivers both in a heartfelt, powerful way. I loved stepping into the world of small-time professional wrestling with M.J. I winced every time she took a hit inside the ring and out, and I cheered every time she got up. What a great middle-grade debut. I truly cannot wait to see what Matt Wallace does next.”
— Greg van Eekhout, author of Voyage of the Dogs and Cog

“I love kids with big dreams, and MJ is a heroine to root for. Bump introduces readers to the world of professional wrestling while also telling a story about grief, friends that become family, and finding your voice. An entertaining and heartwarming read!”
— Janae Marks, author of From the Desk of Zoe Washington

"Matt Wallace makes every pro-wrestling fan's dream come true in Bump. Not only does he know his way around a wrestling ring—he'll have you booing at the heels and cheering for the faces, just like you would ringside—but he knows how to tell a story. Middle-school gymnast turned wrestler MJ isn't just trying to find herself, but the courage to be herself, in a world where cliques, cruelty, unfairness, and grief beat you down. But Bump teaches you that, in life and Lucha, there's always a surprise move that can save you from defeat and pin your opponent—and your fears—down."
— Carlos Hernandez, Pura Belpré Award-winning author of the Sal and Gabi series

"This book did a pile drive on my heart. I was so quickly captivated by MJ as she navigated grief and excitement, fear and joy. Reading Bump is having ringside seats to a touching, hilarious story that the world so desperately needs right now."
— Mark Oshiro, author of Anger Is a Gift and Each of Us a Desert

"Adult fantasy writer Wallace draws on his own wrestling background to make MJ’s every physically punishing step forward a visceral experience for sports-story enthusiasts, and her steady movement toward independence and the acceptance of her father’s death will gratify middle grades domestic drama readers."
— Bulletin of the Center for Children’s Books

"The characters and events are rendered with all the beautifully unambiguous melodrama of a wrestling angle: loathsome bad guys, dramatic promos, and undeniably exciting action. Young fans will cherish gaining a deeper understanding of “sports entertainment”—and of the Mexican-wrestling tradition of lucha libre—and newcomers, too, will find in MJ a baby face worth cheering for."
— Booklist

Leo, age 7 said, “I really liked when the pea gets locked in the jello. It made me laugh.”

Gavin, age 5 said, “I thought it was silly when the pea got loose and made problems for everybody.”

Emory, age 4 said, “My favorite part was the dip and I want you to read it again sometime."