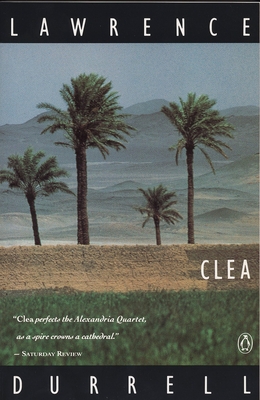 The magnificent final volume of one of the most widely acclaimed fictional masterpieces of the postwar era.

Few books have been awaited as eagerly as Clea, the sensuous and electrically suspenseful novel that resolves the enigmas of the Alexandria Quartet. Some years and one world war was after his bizarre liaisons with Melissa and Justine, the Irish émigré Darley becomes enmeshed with the bisexual artist Clea. That affair not only changes the lovers, it transforms the dead as well, revealing new layers of duplicity and desire, perversity and pathos in Lawrence Durrell’s masterly construction.

“A massive, marvelously concrete, deeply felt statement of faith. . . . His style glows with the mineral deposits of many cultures. One of the most important works of our time has come to an end.”—The New York Times Book Review

“The reader is carried along on a current of superbly accomplished prose, as flexible and colorful as that of any contemporary writer. . . . What Durrell has given us is well worth having.”—San Francisco Chronicle

Lawrence Durrell was born in 1912 in India. He attended the Jesuit College at Darjeeling and St. Edmund's School, Canterbury. His first literary work, The Black Book, appeared in Paris in 1938. His first collection of poems, A Private Country, was published in 1943, followed by the three Island books: Prospero's Cell; Reflections on a Marine Venus, about Rhodes; and Bitter Lemons, his account of life in Cyprus. Durrell's wartime sojourn in Egypt led to his masterpiece, The Alexandria Quartet, which he completed in southern France, where he settled permanently in 1957. Between the quartet and The Avignon Quintet he wrote the two-decker Tunc and Nunquam. His oeuvre includes plays, a book of criticism, translations, travel writing, and humorous stories about the diplomatic corps. Caesar's Vast Ghost, his reflections on the history and culture of Provence, including a late flowering of poems, was published a few days before his death in Sommières in 1990.