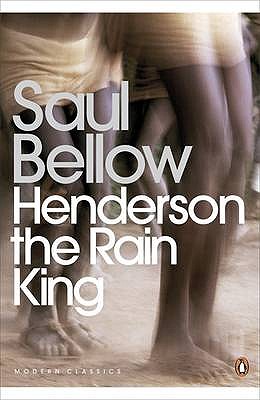 By Saul Bellow
$33.00
Not Available - Possibly Out of Print

"It blazes as fiercly and scintillatingly as a forest fire. There is life here; a great rage to live more fully. In this it is a giant among novels."(San Francisco Examiner)
Saul Bellow evokes all the rich colors and exotic customs of a highly imaginary Africa in this acclaimed comic novel about a middle-aged American millionaire who, seeking a new, more rewarding life, descends upon an African tribe. Henderson's awesome feats of strength and his unbridled passion for life win him the admiration of the tribe but it is his gift for making rain that turns him from mere hero into messiah. A hilarious, often ribald story, "Henderson the Rain King" is also a profound look at the forces that drive a man through life.
This Penguin Classics edition contains an introduction by Adam Kirsch.
For more than seventy years, Penguin has been the leading publisher of classic literature in the English-speaking world. With more than 1,700titles, Penguin Classics represents a global bookshelf of the best works throughout history and across genres and disciplines. Readers trust theseries to provide authoritative texts enhanced by introductions and notes by distinguished scholars and contemporary authors, as well as up-to-datetranslations by award-winning translators.

Saul Bellow (1915 2005) is the author of nearly twenty works of literature, including "Seize the Day," "The Adventures of Augie March," "The Victim," "Herzog," and "Humboldt s Gift." He taught at the University of Chicago and Boston University. He won the Nobel Prize in Literature in 1976.Adam Kirsch is a senior editor at the "New Republic" and a columnist for the "Tablet." He lives in New York City."