You Are One of Them: A Novel About Secrets, Betrayal, and the Friend Who Got Away (Paperback) 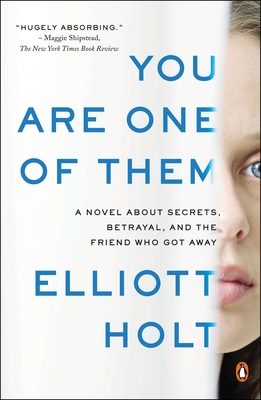 By Elliott Holt
Not available
Not Available - Possibly Out of Print

"A hugely absorbing first novel from a writer with a fluid, vivid style and a rare knack for balancing the pleasure of entertainment with the deeper gratification of insight. More, please.”
—Maggie Shipstead, The New York Times Book Review (Editors’ Choice)

"A story about Russia, the United States, friendship, identity, defection, and deception that is smart, startling, and worth reading regardless of when you were born.”
—Kathryn Schulz, New York Magazine

"Holt's beguiling debut… in which there is no difference between personal and political betrayal, vividly conjures the anxieties of the Cold War without ever lapsing into nostalgia."
—The New Yorker

Sarah Zuckerman and Jennifer Jones are best friends in an upscale part of Washington, D.C., in the politically charged 1980s.  Sarah is the shy, wary product of an unhappy home: her father abandoned the family to return to his native England; her agoraphobic mother is obsessed with fears of nuclear war.  Jenny is an all-American girl who has seemingly perfect parents.  With Cold War rhetoric reaching a fever pitch in 1982, the ten-year-old girls write letters to Soviet premier Yuri Andropov asking for peace.  But only Jenny's letter receives a response, and Sarah is left behind when her friend accepts the Kremlin's invitation to visit the USSR and becomes an international media sensation.  The girls' icy relationship still hasn't thawed when Jenny and her parents die tragically in a plane crash in 1985.

Ten years later, Sarah is about to graduate from college when she receives a mysterious letter from Moscow suggesting that Jenny's death might have been a hoax.  She sets off to the former Soviet Union in search of the truth, but the more she delves into her personal Cold War history, the harder it is to separate facts from propaganda.

You Are One of Them is a taut, moving debut about the ways in which we define ourselves against others and the secrets we keep from those who are closest to us.  In her insightful forensic of a mourned friendship, Holt illuminates the long lasting sting of abandonment and the measures we take to bring back those we have lost.

Elliott Holt's short fiction has appeared in The Kenyon Review, Guernica, and Bellevue Literary Review. She won a 2011 Pushcart Prize and is the runner-up of the 2011 PEN Emerging Writers Award. A graduate of the MFA program at Brooklyn College, where she won the Himan Brown Award, she has received fellowships from the Sewanee Writers' Conference, the Tin House Summer Writers Workshop and Yaddo. She is a former contributing editor at One Story magazine and a former copywriter, who has worked at advertising agencies in Moscow, London, and New York. She currently resides in her hometown of Washington, D.C.

“You Are One of Them is a hugely absorbing first novel from a writer with a fluid, vivid style and a rare knack for balancing the pleasure of entertainment with the deeper gratification of insight. More, please.”
—Maggie Shipstead, The New York Times Book Review (Editors’ Choice)

"Holt's beguiling debut… in which there is no difference between personal and political betrayal, vividly conjures the anxieties of the Cold War without ever lapsing into nostalgia."
-The New Yorker

“If, like me, you are a child of the eighties, you could read Elliott Holt’s You Are One of Them just for the flashbacks: Benetton sweaters, friendship pins, Casey Kasem, the whole shebang. Ultimately, though, all that is just mise-en-scène. Around it, Holt builds a story about Russia, the United States, friendship, identity, defection, and deception that is smart, startling, and worth reading regardless of when you were born.”
—Kathryn Schulz, New York Magazine

“Alluring…Elliott Holt’s debut novel, ‘You Are One of Them,’ a story about youth, about lying, about the Cold War, about Russia, and about womanhood, approaches its heady subjects by letting them live and breathe through the narrative itself. To read it is to forget you’re reading a work of literature, and instead to think that someone is telling you a story — someone who happens to have a wildly intelligent sense of detail and just enough restraint to keep her storytelling skill from showing its seams.”
—The Boston Globe

“Holt has found inventive ways to use language that suggests the porousness of identity, the correspondence between self and other, neighbor and foreigner, you and them. Her ingenuity brings distinction to this confident, crafty first novel.”
—Washington Post

“[An] accomplished debut…You Are One of Them beautifully compresses and expands time, place and the boundaries of the self…Transfixing.”
—San Francisco Chronicle

“A novel of grand and intimate scope, artfully balanced between the political and personal. The book’s narrative satisfies on multiple levels, as both a compelling character study and a psychological thriller with a ferociously intelligent ending.”
—Bookforum

“Like a matryoshka doll, Elliott Holt’s bold, electric debut novel artfully unpacks its secrets…This is an unflinching tale of self-deception and the struggle to lead an authentic life.”
—More Magazine

“It’s that ambiguity that lends the conclusion of You Are One of Them its power. The resolution to Holt’s novel brings together all of the elements raised in the preceding pages, from saber-rattling to childhood betrayals. It’s a dramatically satisfying ending that invokes those things that we can never know — and as such, it’s a reflection of a haunted period of history, of lessons learned in doublespeak that may well have rooted themselves too deeply in our collective minds for us to fully recover.”
—Minneapolis Star Tribune

“Atmospheric… Smoke and mirrors keep a reader guessing till the last pages, when Sarah at last frees herself from a lifetime of feeling left behind.”
—Cleveland Plain Dealer

“A complex and beautifully written book about secrets and relationships, as well as the things we do for closure.”
—Vol. 1 Brooklyn

“Holt creates strong roots, both in 1980s America—with references to friendship pins, Casey Kasem, and the ever-persistent threat of nuclear war—and 1990s Moscow, where tracksuits and cigarettes are never far away. Telling details of Soviet oppression and Russia’s budding advertising industry paint a vivid portrait of a country testing the waters of democracy… [Holt] writes with a pleasing, wry intelligence in this promising debut.”
—Publishers Weekly

“[YOU ARE ONE OF THEM] perfectly melds the personal and the political in this spot-on portrait of a girlhood friendship set against a Cold War backdrop…Holt ably captures both the paranoia of the Cold War and the shabby yet genteel aura of an exhausted Moscow just after the collapse of the Berlin Wall. But it is her razor-sharp insights into the turbulent dynamics of female friendship that give this novel its heft.”
—Booklist

"Intimate and intelligent, You Are One of Them is a surprising story of friendship and loss, but also a meditation on history and a reminder of how global events can reverberate through the smallest moments of ordinary lives."
—Karen Thompson Walker, New York Times bestselling author of The Age of Miracles

“Elliott Holt is not just a promising writer, but a great writer. She’s young, and she’s a master. I was going to write that You Are One of Them could’ve been written by an Alice Munro or a Susan Minot, but that would be wrong. Because this book could only have been written by Elliott Holt, whose powerful new voice is her own.”
—Darin Strauss, author of Half a Life and Chang and Eng

“Elliott Holt’s debut novel You Are One Of Them reads with the heartbreaking ring of truth to it as she deftly taps a well of feeling that is at once primal, archetypical and deeply personal. Through the character of Sarah, Holt explores the indelible stain of grief, a child’s desire for détente, and the inescapable awareness of the life that could have been but wasn’t. Holt’s ability to unwind the dangerous power of secrets and to blend fact and fiction, past and present, make for an evocative journey that circles around to illustrate how far we sometimes have to travel in order to find the self that was there all along.”
—A.M. Homes, author of May We Be Forgiven

“Elliott Holt has done something utterly amazing. Through the experiences of Sarah Zuckerman, the fantastic and complicated narrator of You Are One of Them, Holt shows us a genuine and heartfelt coming of age story that so convincingly reveals the deceptions and half truths of growing up. I have rarely seen such a thought-provoking and engrossing portrayal of how our experiences shape us and, consequently, those we most love. This is an eloquent, startling novel and Elliott Holt is a fearless writer.”
—Kevin Wilson, author of The Family Fang and Tunneling to the Center of the Earth

“You Are One of Them journeys through the U.S. and Russia, perfectly capturing that frightening time in the 1980s when every child went to bed dreaming of mushroom clouds. Like the cold war, this remarkable novel revolves around hidden truths and unreliable friendships. Elliott Holt skillfully draws out her characters’ secrets, exploring the different ways we open and close our hearts, and delivering a well-wrought tale of international and emotional intrigue.”
—Hannah Tinti, author of The Good Thief

“The great accomplishment in You Are One of Them is how effortlessly the vast and global mixes with—and informs—the deeply felt story of a lost friendship. Elliott Holt is graceful, sharp and super-smart, and her novel is a bildungsroman for the atomic age.”
—Lauren Groff, author of Arcadia and The Monsters of Templeton