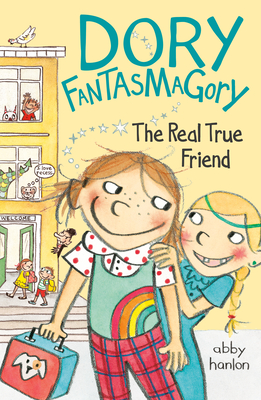 This is book number 2 in the Dory Fantasmagory series.

Fans of Junie B. Jones and Ivy and Bean will love this new story about the spunky little rascal with big ideas.

The star of Dory Fantasmagory is heading to school. Her older siblings, Luke and Violet, warn her to leave her imaginary friend, Mary, at home—or better yet, leave her whole imagination at home! Dory is determined to behave like a “regular old girl who never gets in trouble,” but on her very first day she meets a new friend, a girl whose imagination and style are just about as wild as her own. Now she just has to convince her siblings that she’s not making it all up!

Filled with plenty of funny pictures, this book bursts with charm and impudence, making this a must-read for the chapter book set.

"Dory is as likable a kid heroine as I’ve encountered in a decade."  –The Boston Globe

* "Once again, Hanlon’s hilarious narration and cartooning reveal an uncanny talent for getting into the mile-a-minute mind of a one-of-a-kind girl." –Publishers Weekly, starred review

Abby Hanlon has taught creative writing and first grade. She lives in Brooklyn, New York, with her husband and two children.

Praise for Dory and the Real True Friend:

* "Once again, Hanlon’s hilarious narration and cartooning reveal an uncanny talent for getting into the mile-a-minute mind of a one-of-a-kind girl." –Publishers Weekly, starred review

"Old friends and new will hope this highly successful sequel will not be the last starring this inventive, original child." –Kirkus Reviews

"The story has its tendermoments, but kids will find plenty to laugh about as well. A fine sequel to the popular series opener, Dory Fantasmagory."–Booklist

"Dory and the Real True Friend is a sequel that lives up to, and wonderfully expands the world of the original. It’s genius." – Travis Jonker, 100 Scope Notes Blog

"Dory is as likable a kid heroine as I’ve encountered in a decade."  – The Boston Globe

"This book is AMAZING! Perfection of tone, plot, pacing, art, you name it... In a word, fantastico." –Betsy Bird, A Fuse 8 Production Blog

Raybearer -- the strongest fantasy book AND debut of the fall season -- is the book that Leigh Bardugo and Tomi Adeyemi fans have been waiting for.  Adventure, fantasy, magic, love and loyalty are at the heart of Tarasai’s unthinkable quest in this Nigerian-inspired tale. Epic and cinematic, this is world-building par excellence. Jordan Ifueko has herself a series opener that will knock off your socks and steal your heart. Thrilling!