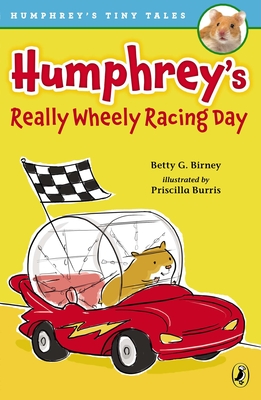 
Available to Order from Our Warehouse
Everyone’s favorite classroom pet is now starring in chapter books!

Humphrey is one happy hamster. He lives in Room 26 at Longfellow School. He has a big comfy cage with a wheel perfect for spinning and a room full of friends. But when Humphrey goes to Mandy’s house one weekend, he learns that her hamster has something Humphrey has never seen before—a hamster car!

Humphrey wants one, too, but school is not usually the place for toys. Then his teacher talks about bringing in something special for a project. Is Humphrey getting a really wheely surprise?

With adorable illustrations and an easy reading level, Humphrey’s Tiny Tales are just right for emergent readers.
Betty G. Birney has won many awards for writing for television, including an Emmy, three Humanitas Prizes, and a Writers Guild of America Award. In addition to the Humphrey series, she is the author of The Seven Wonders of Sassafrass Springs and The Princess and the Peabody's. She grew up in St. Louis, Missouri, where her parents grew up as neighbors on Humphrey Street.
"Birney has created the kind of series that first- and second-grade readers will love. It’s set in school, the vocabulary is accessible, the font and spacing are generous, and the frequent illustrations tie the story together. New readers will be 'HAPPY-HAPPY-HAPPY' to see this promising new series." -Kirkus Reviews

"This title has the same characters, humorous action, and gentle tone of the original, but the large print, short chapters, and numerous cartoon-style illustrations make this one suitable for readers new to chapter books."–School Library Journal

The Aquanaut: A Graphic Novel (Paperback)

A really sweet story about some endangered sea critters learning to pilot an antique diving suit to find help on the surface. They make friends with an excitable little girl and her hard working uncle and attempt to save more than just themselves while they try their hardest to maintain a low profile on land.