A Burial at Sea (Hardcover) 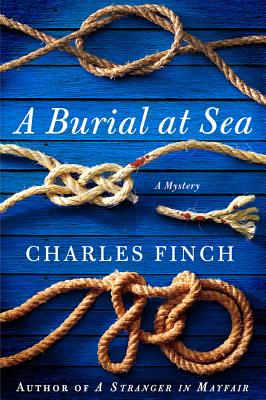 A Burial at Sea (Hardcover)

“Agatha Christie meets Patrick O’Brian in Finch’s accomplished fifth whodunit set in Victorian England (after 2010’s A Stranger in Mayfair), the best in the series to date.”

Charles Lenox, Member of Parliament, sets sail on a clandestine mission for the government.  When an officer is savagely murdered, however, Lenox is drawn toward his old profession, determined to capture another killer.

1873 is a perilous time in the relationship between France and England.  When a string of English spies is found dead on French soil, the threat of all-out war prompts government officials to ask Charles Lenox to visit the newly-dug Suez Canal on a secret mission.

Once he is on board the Lucy, however, Lenox finds himself using not his new skills of diplomacy but his old ones: the ship’s second lieutenant is found dead on the voyage’s first night, his body cruelly abused. The ship’s captain begs the temporarily retired detective to join in the hunt for a criminal.  Lenox finds the trail, but in the claustrophobic atmosphere on board, where nobody can come or go and everyone is a suspect, he has to race against the next crime—and also hope he won’t be the victim.

At once a compulsive murder mystery, a spy story, and an intimate and joyful journey with the Victorian navy, this book shows that no matter how far Lenox strays from his old life, it will always come back to find him.

Charles Finch is a graduate of Yale and Oxford. He is the author of the Charles Lenox mysteries, including "The Fleet Street Murders," "The September Society" and "A Stranger in Mayfair." His first novel, "A Beautiful Blue Death," was nominated for an Agatha Award and was named one of Library Journal's Best Books of 2007, one of only five mystery novels on the list. He lives in Oxford, England.

"A rousing nautical adventure ... Finch’s descriptions of life at sea are so fascinating it’s a shame Lenox must bring this case to an end." -- The New York Times "Agatha Christie meets Patrick O’Brian in Finch’s accomplished fifth whodunit set in Victorian England ... the best in the series to date."-- Publishers Weekly (Starred Review) "An agreeable spin on the classic locked-room mystery yarn; it’s Murder on the Orient Express as reimagined by Patrick O’Brian."-- Daniel Stashower, AARP "The murder mystery that Finch weaves keeps readers guessing...an intriguing read on several levels."-- The Seattle Times