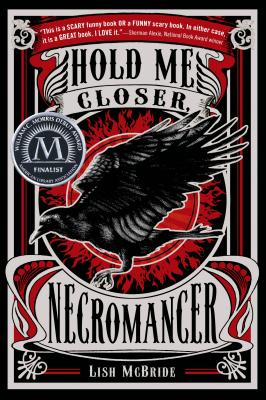 This is book number 1 in the Necromancer Series series.

Sam leads a pretty normal life. He may not have the most exciting job in the world, but he's doing all right—until a fast food prank brings him to the attention of Douglas, a creepy guy with an intense violent streak.

Turns out Douglas is a necromancer who raises the dead for cash and sees potential in Sam. Then Sam discovers he's a necromancer too, but with strangely latent powers. And his worst nightmare wants to join forces . . . or else.

With only a week to figure things out, Sam needs all the help he can get. Luckily he lives in Seattle, which has nearly as many paranormal types as it does coffee places. But even with newfound friends, will Sam be able to save his skin?

Hold Me Closer, Necromancer is a 2011 Bank Street - Best Children's Book of the Year.

Lish McBride grew up in the Pacific Northwest. It rains a lot there, but she likes it anyway. She spent three years away while she got her MFA in fiction from the University of New Orleans, where she managed to survive the hurricane. She enjoys reading, having geek-laden conversations about movies, comics, and zombies with her friends, and of course trying to wear pajamas as much as humanly possible. She lives happily in Mountlake, WA, with her family, two cats, and one very put-upon Chihuahua. Her debut novel, Hold Me Closer, Necromancer was named an American Library Association Best Book for Young Adults and was a finalist for the YALSA William C. Morris Award.

“McBride's humor and ear for dialogue carry the book. There's a Mad-magazine-meets-‘Twilight' sensibility to ‘Hold Me Closer, Necromancer' that will keep readers turning pages and laughing all the way.” —Los Angeles Times

“A fast-paced and fun first novel . . . This is a welcome humorous addition to the paranormal trend.” —The Oregonian

“The richness of the supernatural underworld, complete with politics, history, and personal vendettas, is another draw, and honorable, desperate, smart-alecky, clueless Sam is the perfect vehicle for entry. Readers seeking a thoughtful, original, and compelling supernatural adventure need look no further.” —BCCB, STARRED review

“With fine writing, tight plotting, a unique and uniquely odd cast of teens, adults, and children, and a pace that smashes through any curtain of disbelief, this sardonic and outrageous story's only problem is that it must, like all good things, come to an end.” —Booklist, Starred Review

“McBride pulls no punches and hits where readers will least expect it; the story can be gory and violent, but isn't gratuitously graphic. A solid start that concludes with the promise of Sam's power growing greater and darker, secrets getting deeper, and more fun to follow.” —Publishers Weekly

“Sam is the ultimate laid-back slacker who also happens to be smart, funny, sweet, and adorable. Every character in this book seems to live in the moment, offering sarcastic humor that lightens up the intense action and dark suspense. Hold Me Closer, Necromancer is entertaining, offbeat, hilarious, and flat-out fun. We loved it.” —Justine magazine

“Part scary, part funny, with a touch of tenderness, Hold Me Closer, Necromancer holds readers spellbound with unforgettable characters, snappy dialogue and killer (sometimes literally) song lyrics that open and offer clues to each chapter. Drawing on the timeless adolescent quest for identity and the popularity of supernatural fiction, McBride makes Sam's adventures a scream--and a hoot.” —BookPage

Displacement is simply incredible. This story follows a young girl, Kiku, living in San Fransisco who has been making small efforts to connect with her Japanese American descent, when suddenly, Kiku begins to be whisked away in time and place—what she calls being “displaced”—and she realizes she is being pulled into the time of Japanese American incarceration during WWII. These displacements keep happening, until suddenly, Kiku is trapped in the past. She is displaced into a Japanese incarceration camp, and must learn to live during this terrible time and place for her fellow Japanese Americans, without knowing if she’ll ever return. This graphic novel is so quietly powerful and so superbly genius in the way it tells the story. Kiku discusses these displacements and how horrifying it is to be taken from her home and unsure of when she’ll ever get back—which functions as a perfect allegory to the very experience of those Japanese Americans who were taken from their homes and their lives wrongfully, without knowing where they were going or how long they’d be there. It connects the reader to this painful, real experience in an amazing way. This graphic novel is also deeply educational, taking you through many facets and details of the experience of those Japanese Americans who lived through these camps, while also pointing out how limited public education is around this terrible part of our American history. Displacement will stay with me forever; this gem is a must-have for any graphic novel collection, and an extremely important read for all Americans.