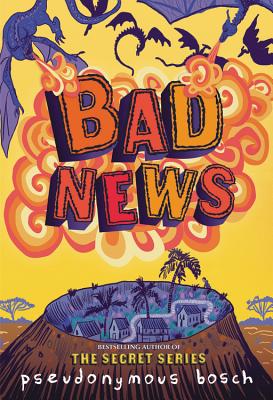 By Pseudonymous Bosch
$8.99
Coming from our Warehouse. Ships in 1-5 Days

This is book number 3 in the The Bad Books series.

At Earth Ranch, Clay encountered a haunted library, a castaway boy, and a fire-breathing dragon--not to mention incredible magic. Now he faces his most dangerous foes yet: the mysterious white-gloved members of the Midnight Sun, whose scheming leads Clay to a dragon reserve. Up against impossible odds, will Clay and his Secret Series Allies be able to triumph over these villains once and for all?

Packed with action, humor, magic, mystery, and dragons, Pseudonymous Bosch answers long-simmering questions as he delivers his most exciting adventure yet.

Pseudonymous Bosch is the infamously anonymous author of the New York Times bestselling Secret Series and the Bad Books. Despite rumors to the contrary, his books are not actually written by his pet rabbit, Quiche; the rabbit is merely his typist.


"Bosch's Bad Books trilogy roars to a fiery close...[and] Bosch's patented sense of humor runs through the action-packed plot and comical footnotes....Series fans will doubtless be sad to bid these characters adieu, but they certainly go out in style."

Praise for Bad Luck:
"Readers will be thoroughly entertained by this second installment in the Bad Book series."
—Booklist

"This second volume has plenty of Bosch's signature cheekiness and footnotes, and it's chock-full of intrigue, danger, secret missions, betrayal, a magical library within a library, and a creature straight from legend. Longtime Bosch fans will be thrilled at the reappearance of characters from his "Secret Series," but the good fun and solid adventure will delight new readers just the same. An excellent addition to middle grade collections.

Praise for Bad Magic:
"Bosch employs, to great effect, his signature irreverence and hilarity... a delight to read. Bad Magic is a clever and playful novel. An excellent addition to middle grade fiction collections."—School Library Journal

"Enjoyable...Bosch's arch narrative voice carries over from his previous books...From The Tempest and Lord of the Flies to shows like Gilligan's Island and Lost, cultural allusions abound as Clay tries to understand the island's many mysteries and meets his fellow campers. Gilbert's watercolors bring in additional humor."—Publishers Weekly

"[Bad Magic] contains threads of mystery, magic, word games, and snark... It is suspenseful, humorous, clever, and most importantly, fun. Bad Magic is definitely entertaining for a wide range of readers."—Voya