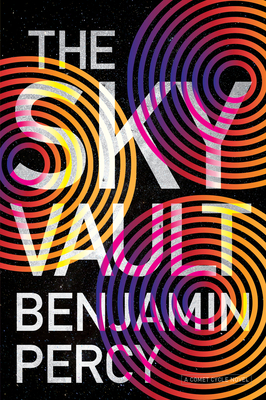 This is book number 3 in the The Comet Cycle series.

The third book in Percy’s innovative and acclaimed Comet Cycle, The Sky Vault follows the aftermath of an airplane that goes missing over Fairbanks, Alaska, in the wake of the comet, and a teenager’s search for answers about his father's final moments aboard the flight.

The comet, Cain, came from beyond our solar system, its debris containing elements unknown. It brought a powerful new metal to the once-declining Midwest; alien fungus to the forests of the Pacific Northwest; and now, in the isolated region of Fairbanks, Alaska, the skies shift and stretch as an interstellar dust cloud seeds itself in the atmosphere. The National Weather Service dismisses the anomaly. Then, an hour outside of Fairbanks, a plane shudders its way through pulpy, swirling, bruise-shaped clouds, lit with sudden cracks of lightning. The sky opens. And the plane vanishes.

Theo Jenson is fifteen years old when his father inexplicably disappears along with the plane, and the month-long search for him ends with a funeral procession and the beginnings of acceptance. Despite the tragedy, Theo’s popularity in school skyrockets, while his best friend Wheezy remains on the outskirts of any real social circle. Their friendship will be put to the test when other Fairbanks citizens begin to vanish, sucked up by a funnel cloud that extends like an elephant’s trunk, and chased down by a mist that solidifies into the shape of a man.

Most comets, it’s generally believed, are made of a combination of rock and ice. But the fact that so many of them blink out of existence—seen one day, gone the next—makes some scientists believe they are cored with something known as “mirror matter,” another term for the dark matter we know exists in the universe because of its gravitational force. The effects of Cain’s dark matter are still not entirely known, but its impact on Earth might be more treacherous, or sublime, than could ever be imagined.

BENJAMIN PERCY has won a Whiting Award, a Plimpton Prize, two Pushcart Prizes, an NEA fellowship, and the iHeartRadio Award for Best Scripted Podcast. He is the author of the novels The Ninth Metal, The Unfamiliar Garden, The Dark Net, The Dead Lands, Red Moon, and The Wilding; three story collections; and an essay collection, Thrill Me. He also writes Wolverine and X-Force for Marvel Comics. He lives in Minnesota with his family.

PRAISE FOR THE NINTH METAL   “When Benjamin Percy publishes a novel, I have got to read that novel. The Ninth Metal continues his streak of thrilling, incisive genre-bending goodness. It’s a sci-fi novel, a crime novel, and a superhero novel too. Audacious and intelligent and exactly what I was dying to read.” —Victor LaValle, author of The Changeling   “Whether you choose to think of him as the Elmore Leonard of rural Minnesota or the Stephen King of science fiction, Ben Percy—with his extraordinary and unrelenting eye—dishes up humanity like some kind of otherworldly blue-plate special, at once deeply familiar and wildly new.” —Margaret Stohl, New York Times best-selling author   “Take one part dystopia, one part sci-fi, two parts apocalypse, then ride them roughshod through a bleak and bloody western, and it still wouldn’t get close to what Ben Percy does here, which is blow open the core of humanity’s dark heart.” —Marlon James, Booker Prize–winning author of Black Leopard, Red Wolf  PRAISE FOR THE DARK NET  A New York Times Book Review Editors’ Choice Minnesota Book Award finalist An Indie Next Pick An iBooks Most Anticipated Mystery & Thriller Selection A Powell’s Books Staff Pick ​An Amazon Best Book of the Month, Mysteries and Thrillers   “Masterful crafting . . . a horror story for our times.” —Minneapolis Star Tribune   “Benjamin Percy’s distinctive brand of horror fiction . . . is on full display in The Dark Net. The novel blends aspects of techno-thrillers with supernatural horror for page-turning results. Percy is no stranger to unlikely genre fusions, but The Dark Net’s idiosyncratic brew is particularly enticing.” —Shelf Awareness   “A rich mash-up of suspense, techno-thriller, horror, and the supernatural, Percy pulls it all together with a terrific cast of characters, finely-tuned plot twists, and killer prose, sprinkled generously with spot-on snark and fun puns, as well as lovely turns of phrase.” —Seattle Review of Books   “Maybe you’ve read it before. But you haven’t read it like Percy can write it.” —Lewiston Tribune   “Of all the things that The Dark Net is, the greatest is that it’s a Blob-swallowing thing . . . if you’re into Benjamin Percy’s work, you’ll love this, and if you don’t even know who Benjamin Percy is, this book will make you want to devour his other books.” —PANK   “A brisk read that sweeps us along with the good guys as they try to pull the plug on a Satantic Singularity.” —Toronto Star   “Percy’s greatest strength—and he has many—has always been his world building . . . those who only know of Percy’s work through his meteoric success in comic books will find The Dark Net to be the perfect crossover work to his novels. Action packed, fast-paced, and incredibly imaginative, The Dark Net is yet another feather in Benjamin Percy’s cap.” —Crimespree Magazine&n —