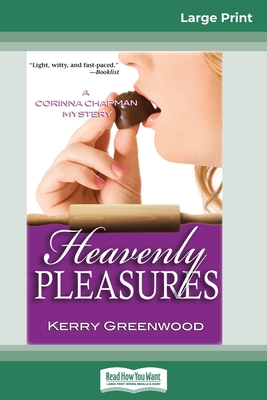 
Available to Order from Our Warehouse
This book cannot be returned
Baker Corinna Chapman is happy with her life. Jason, the former addict she rescued from her alleyway, is shaping into a good apprentice. And her beautiful Israeli lover, Daniel, though away for the last couple of weeks, is as enchanting as ever. Corinna has no intention of doing any more investigative work. At least until she bites into what should have been a lovely violet cream gourmet chocolate and instead finds a chili-filled catastrophe. Corinna doesn't want to see Juliet and Vivienne Lefebvres chocolate shop, Heavenly Pleasures, shut down. And quite frankly, it is just a crime to ruin those gorgeous chocolate confections. Is this tampering part of an elaborate and horrible joke, or is it a warning that worse may yet happen? In the meantime, Daniel has returned bruised and battered from an encounter with a so-called messiah. Is the messiah somehow involved in this chocolate crime? And just who is the mysterious man who has moved into the upper apartment? Heavenly Pleasures is the second installment in Kerry Greenwood's Corinna Chapman series.

This heartfelt, authentically moving memoir of Somali refugees will grab your heart and not let go! Readers will be on the journey with Omar and his brother through hardship, heartbreak, multiple setbacks, but ultimately triumphing in their quest for a permanent home. This graphic novel packs an emotional wallop so be ready to take these boys into your heart!