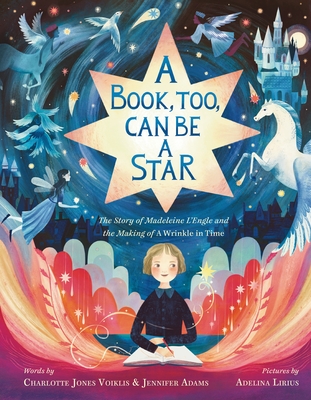 How do you get your creative juices flowing? In this lovingly told, gorgeously illustrated picture book biography of beloved author Madeleine L’Engle, inspiration like singing stars in the night sky, will crawl inside your heart begging readers to ask big questions and always look for answers. Stunning!

An inspiring picture book biography of beloved author Madeleine L’Engle and the making of A Wrinkle in Time.


When Madeleine L'Engle was very small, she often found herself awake at night, marveling at the stars. They guided her throughout her life, making her feel part of a big and exciting world, even when she felt alone. They made her want to ask big questions—Why are we here? What is my place in the universe?—and let her imagination take flight. Books, too, were like stars—asking questions and proposing answers. Books kept Madeleine company, and soon, she began to write and share her own. But would other people see the wonder she found in the world?

Written by Madeleine's granddaughter Charlotte Jones Voiklis and bestselling picture-book author Jennifer Adams, A Book, Too, Can Be a Star follows the life of one of the world's greatest creators—and gives children encouragement to lead a creative, inquisitive life.

Charlotte Jones Voiklis manages her late grandmother Madeleine L'Engle's literary business. She lived with her grandmother during college and graduate school, co-hosting dinner parties, helping answer readers' letters, and earning a Ph.D. in Comparative Literature. Charlotte has worked in academia, nonprofit communications and fundraising, and philanthropy. She lives in New York City with her husband and two children.

Jennifer Adams is the author of 50 books, including the best-selling BabyLit series, which introduces small children to the world of classic literature and has sold more than 2 million copies. Jennifer edits the children's book line at Sounds True and works weekends at her local independent bookstore The King's English.

Adelina Lirius is an illustrator based in Stockholm, Sweden. She loves painting imaginary scenes, portraying nature, and depicting the different cultures she grew up with. Adelina is the illustrator of a picture book adaptation of The Secret Garden and The Fort.