The Sweet Smell of Christmas (Hardcover) 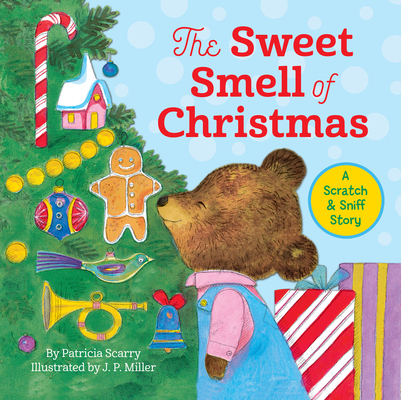 The Sweet Smell of Christmas (Hardcover)


Recently On Our Shelves
Celebrate the sights and smells of Christmas with this classic scratch-and sniff book--a fragrant stocking stuffer perfect for any child!

Join Little Bear as he prepares for the holidays, all the while giving readers a chance to smell six wonderful scents including apple pie, christmas tree, hot chocolate, and more! This delectable treat is a perfect way for families to spend the yuletide season.
Patricia M. Scarry (1924–1995) was a writer of children's books. She wrote many stories that were illustrated by her husband, Richard Scarry, including Good Night, Little Bear, The Bunny Book, and The Fishing Cat.

J. P. Miller (1913-2001) illustrated many Golden Books from the 1940s through the 1970s, some written by Margaret Wise Brown and Edith Kunhardt. Before becoming a children's book illustrator, Miller had worked in the Walt Disney Studios' elite character modeling department, creating characters (such as the dwarf Dopey) for Disney's first feature film, Snow White. He later designed the character of the toy maker Geppetto for Pinocchio.