Watch for Me on the Mountain: A Novel of Geronimo and the Apache Nation (Paperback) 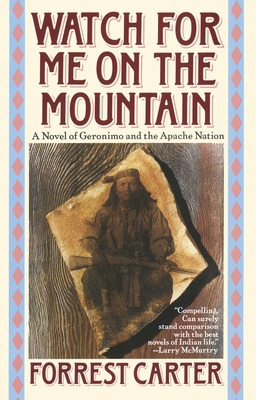 Watch for Me on the Mountain: A Novel of Geronimo and the Apache Nation (Paperback)


NOT AVAILABLE
The white man had burned their land, raped their women, and slaughtered their children. He had made them a nation of slaves, and those he could not enslave, he promised to destroy. The Apache had one hope: vengeance.

Out of the scattered remnants of the Apache tribes rose a man whose cunning, ferocity, and genuis for warfare would make him their leader in a last tragic struggle for survival.  The Apache gave him their arms, their strength, and their absolute devotion. The white man gave him his name: Geronimo!
Forrest Carter (1925–1979) was the author of The Rebel Outlaw: Josey Wales, The Vengeance Trail of Josey Wales, The Education of Little Tree, and Watch for Me on the Mountain.