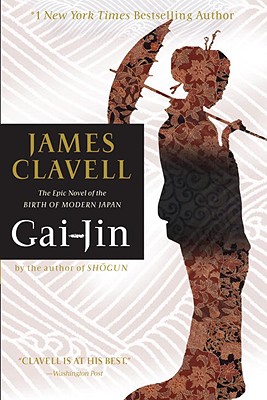 By James Clavell
$20.00
Not Available - Possibly Out of Print

This is book number 3 in the Asian Saga series.


The heir to the magnificent English trading company, the Noble House…the direct descendant of the first Toranaga Shogun battling to usher his country into the modern age…a beautiful young French woman forever torn between ambition and desire…Their lives intertwine in an exotic land newly open to foreigners, gai-jin, torn apart by greed, idealism, and terrorism. Their passions mingle with monarchs and diplomats, assassins, courtesans and spies. Their fates collide in James Clavell’s latest masterpiece set in nineteenth-century Japan—an unforgettable epic seething with betrayal and secrets, brutality and heroism, love and forbidden passions.…

“With great skill and intelligence…Gai-Jin is just the ticket. It has it all: murders, battles, rapes, earthquakes, sword fights, insanely convoluted political intrigues, and innumerable accounts of ‘pillowing’ with beautiful women.”—San Francisco Chronicle

“Engrossing…entertaining…the broad portrait is accurate and as colorful as an ancient Kabuki play.”—People