The Beggar, The Thief and the Dogs, Autumn Quail (Paperback) 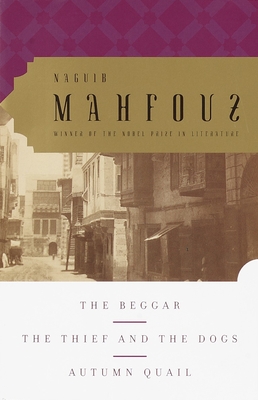 By Naguib Mahfouz
$18.70
NOT AVAILABLE

Anchor proudly presents a new omnibus volume of three novels--previously published separately by Anchor--by Naguib Mahfouz, winner of the Nobel Prize in Literature. Assembled here is a collection of Mahfouz's artful meditations on the vicissitudes of post-Revolution Egypt. Diverse in style and narrative technique, together they render a rich, nuanced, and universally resonant vision of modern life in the Middle East.

The Beggar is a complex tale of alienation and despair. In the aftermath of Nasser's revolution, a man sacrifices his work and family to a series of illicit love affairs. Released from jail in post-Revolutionary times, the hero ofThe Thief and the Dogs blames an unjust society for his ill fortune, eventually bringing himself to destruction. Autumn Quail is a tale of moral responsibility, isolation, and political downfall about a corrupt bureaucrat who is one of the early victims of the purge after the 1952 revolution in Egypt.

Naguib Mahfouz was born in Cairo in 1911 and began writing when he was seventeen. His nearly forty novels and hundreds of short stories range from re-imaginings of ancient myths to subtle commentaries on contemporary Egyptian politics and culture. Of his many works, most famous is The Cairo Trilogy, consisting of Palace Walk (1956), Palace of Desire (1957), and Sugar Street (1957), which focuses on a Cairo family through three generations, from 1917 until 1952. In 1988, he was the first writer in Arabic to be awarded the Nobel Prize in Literature. He died in August 2006.

"The incredible variety of Mahfouz's writing continues to dazzle our eyes."--The Washington Post

"[Naguib Mahfouz] is not only a Hugo and a Dickens, but also a Galsworthy, a Mann, a Zola, and a Jules Romains."--Edward Said, The London Review of Books

END_OF_DOCUMENT_TOKEN_TO_BE_REPLACED

This feature require that you enable JavaScript in your browser.
END_OF_DOCUMENT_TOKEN_TO_BE_REPLACED

This feature require that you enable JavaScript in your browser.
END_OF_DOCUMENT_TOKEN_TO_BE_REPLACED

This feature require that you enable JavaScript in your browser.
END_OF_DOCUMENT_TOKEN_TO_BE_REPLACED