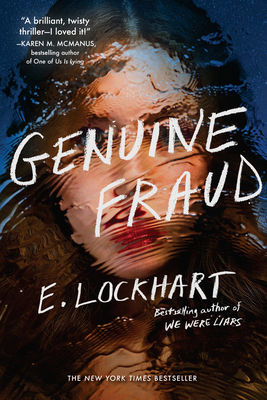 Gets you from the very first chapter! I am not a huge fan of thrillers, but this one had me hooked. Rebecca Soler does a wonderful job of narrating all the different voices and tones in the book in a way that had me rivited. The characters are just there in your head so vividly and the need to figure out the timeline is real. Such a twisted tale, sure to bring you hours of entertainment.

"A brilliant, twisty thriller--I loved it!" —KAREN M. MCMANUS, bestselling author of One of Us is Lying

From the author of We Were Liars, which John Green called "utterly unforgettable," comes a mind-bending, New York Times bestselling thriller told in reverse.

Imogen lives at the Playa Grande Resort in Cabo San Lucas, Mexico. She spends her days working out in the hotel gym and telling other guests how she was forced out of Stanford.

But Imogen isn't really Imogen. She's Jule. And she's on the run from something. Or someone. Which means . . . where is the real Imogen?

Rewind: Jule and Imogen are the closest of friends. Obsessed with each other, even. Imogen is an orphan, an heiress; she and Jule spend a summer together in a house on Martha's Vineyard, sharing secrets they'd never reveal to another soul.

But that was months ago. Where is Immie now? And why is Jule using her name?

"You will devour it." —Gayle Forman, bestselling author of If I Stay

“Fans of E. Lockhart’s We Were Liars will love this . . . and definitely won’t see the ending coming.”  —HelloGiggles.com

“Tangled secrets, diabolical lies and, ultimately, a mind-blowing outcome are crafted with the plotted precision we expect (and love!) from E. Lockhart.” —Justine Magazine

“As with E. Lockhart's previous novel, the best-selling "We Were Liars," [readers] will likely finish the last page and flip right back to the beginning to search for clues they missed.” —Chicago Tribune

E. Lockhart wrote the New York Times bestseller We Were Liars, which is also available in a deluxe edition. Her other books include Fly on the Wall, Dramarama, The Disreputable History of Frankie Landau-Banks, and the Ruby Oliver Quartet, which includes The Boyfriend List, The Boy Book, The Treasure Map of Boys, and Real Live Boyfriends. Visit her online at emilylockhart.com, and follow @elockhart on Twitter.

"A brilliant, twisty thriller--I loved it!" --Karen M. McManus, bestselling author of One of Us Is Lying

"Fans of E. Lockhart's We Were Liars will love this . . . and definitely won't see the ending coming." --HelloGiggles.com

"Tangled secrets, diabolical lies and, ultimately, a mind-blowing outcome are crafted with the plotted precision we expect (and love!) from E. Lockhart." --Justine Magazine

"The coming-of-age plot and complicated friendship between its two main characters make Genuine Fraud seem like it could be Girls for a younger set." --Vanity Fair

"As with E. Lockhart's previous novel, the bestselling We Were Liars, [readers] will likely finish the last page and flip right back to the beginning to search for clues they missed." --Chicago Tribune

"If there are two things you can count on E. Lockhart for it's badass ladies and killer atmosphere--Genuine Fraud has both in droves." --Bustle

“A bracing pace, a slew of far-flung locations, and a storyline that runs mostly in reverse will keep readers on their toes, never entirely sure of what these girls are responsible for or capable of.” —PW, Starred Review

“This thriller from the author of We Were Liars will challenge preconceptions about identity and keep readers guessing.” —Kirkus Reviews, Starred Review