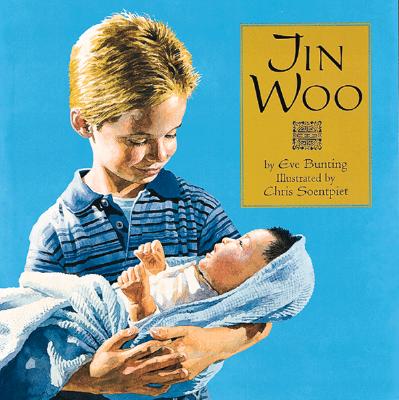 David likes his family the way it has always been, just him and Mom and Dad. He never wanted to be a big brother. And he certainly didn’t want Jin Woo, the little baby from Korea, to join the family. Now Jin Woo is getting all the attention, and David feels as if no one cares about him anymore. But then a surprising letter helps him to understand that being a brother can mean being surrounded with more love than ever.
Eve Bunting and Chris Soentpiet bring the same deep emotion that distinguished their previous collaboration, So Far from the Sea, to this moving story of an adoptive family that has love to spare.

Eve Bunting has written over two hundred books for children, including the Caldecott Medal-winning Smoky Night, illustrated by David Diaz, The Wall, Fly Away Home, and Train to Somewhere. She lives in Southern California.

Chris K. Soentpiet is an award-winning illustrator whose work reflects his interest in people, history, and culture. He was given the gold medal from the Society of Illustrators in New York City for his illustrations in Haemi Balgassi's Peacebound Trains, and his books have been recognized by the American Booksellers Association, School Library Journal, the International Reading Association, the Junior Library Guild, Parents' Choice, Parents' magazine, and Smithsonian magazine. Soentpiet has a B.F.A. from Pratt Institute.

Among the prolific Bunting's many talents is a propensity for distilling complex social issues into accesible picture books that begin to make subjects such as the Vietnam Veterans Memorial, adult illiteracy, and homelessness more understandable to younger children. This picture-book exploration of the arrival of an adopted Korean baby named Jin Woo is the second collaboration by Bunting and Soentpiet (So Far From the Sea, 1998) and as a Korean adoptee himself, the talented Soentpiet is particularly well-qualified to illustrate this one. Jin Woo's story is told in the present tense from the viewpoint of the baby's older brother, a six- or -seven-year-old named David, who is also adopted. He is alternately sad, hopeful, unbelieving, and excited at this change in his life, which is an accurate portrayal of the whirlwind of feelings that surround any new big brother. David's parents are understandably thrilled with their joyous emotions captured in both Bunting's text and in Soentpiet's detailed, realistic paintings. His large-format illustrations are the book's main strength, surpassing Bunting's serviceable story, which is not as compelling as some of her other picture book texts. There are some wonderful recent books on inter-country adoption (notably Rose A. Lewis's I Love You Like Crazy Cakes, 2000), but very few that focus on the mixed feelings of older siblings. This will find a ready audience with many adoptive families, especially those preparing to adopt Asian babies.
Kirkus Reviews

Jin Woo is the baby that's coming from Korea to be adopted by David's family, but David's not sure how he feels about having a little brother. The night before Jin Woo's arrival, the family goes to a Korean restaurant. The next day, they pick up the baby at the airport, where David gets to hold the chubby, happy child. When his mother reads him a comforting letter "written" by Jin Woo, David feels things will work out after all. The story's climax comes when David decides to give his brother the duck mobile that spins over his bed. However, the pictures make David look at least seven; a mobile at that age seems a bit bizarre. Otherwise, the art is the high point of this solid piece of bibliotherapy. It has a photographic clarity that makes these characters real enough to touch, and adorable Jin Woo looks eminently huggable. A solid choice for adoption shelves, especially for those looking for material on international adoption.
Booklist, ALA