Who Was Johnny Cash? (Who Was?) (Paperback) 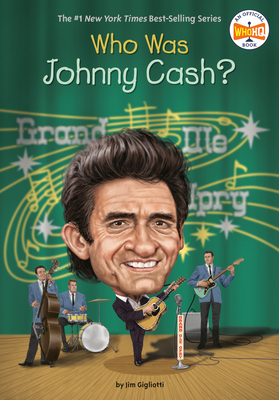 Who Was Johnny Cash? (Who Was?) (Paperback)


Recently On Our Shelves
Was Johnny Cash always the rebellious "Man in Black" that we remember him as today? Find out in this biography from the #1 New York Times bestselling series that takes us from Cash's childhood on an Arkansas cotton farm to his first days in rockabilly through his most famous years as a country music legend and icon of American songwriting.

Due to his wide range of musical talent and an incomparable career spanning forty-nine years, Johnny Cash has been inducted into the Country, Rock and Roll, Rockabilly, and Gospel Halls of Fame. He also won 18 Grammys and 9 Country Music Association Awards. Who Was Johnny Cash? lets young readers learn about every step in Johnny Cash's groundbreaking musical career. As one of the best-selling American musicians of all time, Cash, born JR Carter, was known for his rich, deep voice and musical style that featured a chugging, train-like beat.
Jim Gigliotti is a writer based in Southern California. A former editor at the National Football League, he has written more than 50 books for readers of all ages, including biographies for young readers on Olympian Jesse Owens, baseball star Roberto Clemente, scientist Nikola Tesla, and musician Stevie Wonder.