The Rain Came Down (Hardcover) 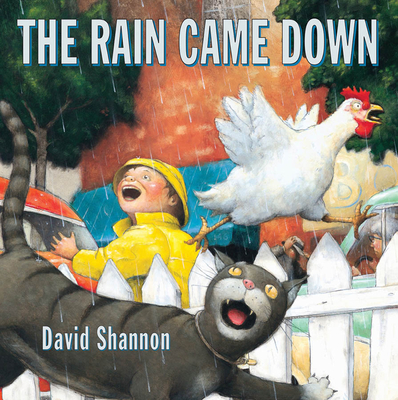 David Shannon is the internationally acclaimed creator of more than thirty picture books, including No, David!, a Caldecott Honor Book and his second New York Times Best Illustrated Book of the Year, and three more David picture books. Shannon's bestsellers include A Bad Case of Stripes, Duck on a Bike, and Too Many Toys! He lives in California with his family.

"When the rain starts falling one morning, some chickens squawk, which makes a cat yowl. A dog barks at the cat, and a man yells at the dog, which causes his baby to try, and the man's wife shouts, 'Stop all that yelling!" A police officer blocks traffic to check on the domestic disturbance and soon the whole neighborhood is honking, bickering, and snapping at one another a chain reaction of human frustration. "And still, the rain came down." Shannon's, pacing re- flects the controlled chaotic scene in the urban, 19SOs-era neighborhood and builds dramatically to the cacophonous climax, making this a natural choice for reading aloud. Framed in white, large close illustrations show gently caricatured people, their faces distorted with irritation. Humorous details in the art-work relative the mood of increasing crankiness: in the comer of one painting, for example, a family of ducks boldly crosses the traffic-congested street in classic McCloskey fashion. At the height of the discord, Shannon pulls away to show a bird's-eye view of the noisy, cramped, waterlogged street while the text puts on the brakes: 'And then., . [page turn].. the rain stopped!" The sun comes out, and calm and good will are restored In the end we arrive almost where we started, in the backyard witt the man, his wife, their baby, and their pets peacefully enjoying the sunny afternoon. Want to settle down an overly rambunctious group! Let them blow off steam with this satisfyingly circular story-they'l be transformed by the time the storm passes." K.P.
The Horn Book, Sept/Oct. 2000


"Raindrops set off a chain reaction of temper tantrums, but a sudden break in the clouds makes the bad moods melt. A series of isolated vignettes begins with a noisy, muddy dog that aggravates its owner, so "the man yelled at the dog and woke up the baby. . . The dog barked louder. And still, the rain came down." Outside, a taxi driver beeps at a stopped truck, and in the next frame, the truck driver argues back. One by one, shop owners collide with pedestrians as tension accumulates, all to the refrain, "And still, the rain came down." After this series of intense close-ups, Shannon (No, David!) gives a bird's-eye view of the whole scene: small-town storefronts, bumper-to-bumper traffic and irritable people. But in the next spread, he swings down to street level and captures the moment that "the rain stopped! And so did the noise." The sunshine changes everything, and a second sequence of highly detailed paintings revisits each of the now-cooperative characters. Shannon expertly uses vertiginous angles as he builds suspense, then calms things down with a set of subdued portraits and a view of a quiet afternoon picnic. However, unlike Charlotte Zolotow's similarly conceived The Quarreling Book, which took a child's point of view, here the action is primarily among adults and may not hold readers' attention for repeated readings."
--Publishers Weekly, October 16, 2000

A rainstorm brings the city to a cacophonous halt in Shannon's spirited, beautifully illustrated new work. "On Saturday morning, the rain came down." It makes the chickens squawk, which makes the cat yowl, the dog bark, the man yell, his baby cry, and his wife shout. The chaos grows, out of the house and into the streets. Just as it seems a riot will ensue, the rain stops, and the crowd gradually untangles. The book ends in the backyard where it all began-with husband, wife, and baby picnicking serenely next to snoozing animals. The brief text is well paced and filled with words that build the story's tension and noise. But it's the colorful painted spreads that will most interest children.
Wild, detailed street scenes, filled with richly drawn characters and shifting perspectives, show the absurdity and humor in each incident that contributes to the larger chaos. Children will return to these scenes of raucous upheaval and sigh with relief when calm is restored. -Gillian Engberg
---Booklist, October 15, 2000

When the rain begins to fall on a Saturday morning, a rather commonplace chain of events evolves into an oversized traffic jam encompassing many cranky, angry, even furious folks. From the squawking chickens, yowling cat, barking dog, and crying baby through the bickering shop-owners, truck and taxi drivers, the gloom of the rain spreads its discontent. But when it stops, the sunshine brings, along with a rainbow, a return to the normal, pleasant cooperation among all those who were upset, and a delicious happiness to the family where the story's focus began.
Realistic though the frictions may be, artist David Shannon makes sure that we can't take them too seriously. From the cover scene of near panic among some awestruck hens as the rain begins, to the fractious family and the puzzled policeman blocking traffic, the pictures depict each upset with humor. Shannon not only provides all the local details of a neighborhood, but he adds such touches as a TV baseball game being rained out and, perhaps in homage to Make Way for Ducklings (Viking, 1941), a family of ducks using the clogged traffic to Cross the street in safety. The single-and double-page paintings crowd the borders with sculpturesque people and equally solid vehicles in theatrical settings. In the contrast between the beginning, when the rain keeps coming down and all is frenetic 'and the calm that descends when the rain ends, the diagonals of anger become the static horizontals and verticals of neighborly peace.
---The Five Owls, September/October 2000