Duck On A Bike (Hardcover) 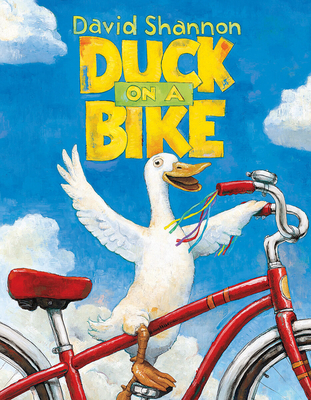 One day down on the farm, Duck got a wild idea. "I bet I could ride a bike," he thought. He waddled over to where the boy parked his bike, climbed on and began to ride. At first he rode slowly and he wobbled a lot, but it was fun! Duck rode past Cow and waved to her. "Hello, Cow!" said Duck. "Moo," said Cow. But what she thought was, "A duck on a bike? That's the silliest thing I've ever seen!"
And so Duck rides past sheep, horse, and all the other barnyard animals. Suddenly, a group of kids ride by on their bikes and run into the farmhouse, leaving the bikes outside. Now ALL the animals can ride bikes, just like Duck!

David Shannon is the internationally acclaimed creator of more than thirty picture books, including No, David!, a Caldecott Honor Book and his second New York Times Best Illustrated Book of the Year, and three more David picture books. Shannon's bestsellers include A Bad Case of Stripes, Duck on a Bike, and his recent Bugs in My Hair. He lives in California with his family.