The Centaur: A Novel (Paperback) 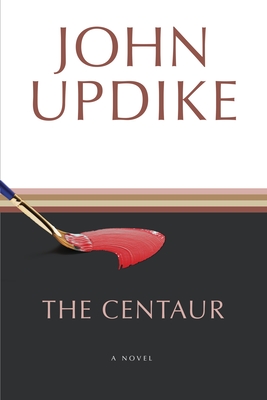 The Centaur is a modern retelling of the legend of Chiron, the noblest and wisest of the centaurs, who, painfully wounded yet unable to die, gave up his immortality on behalf of Prometheus. In the retelling, Olympus becomes small-town Olinger High School; Chiron is George Caldwell, a science teacher there; and Prometheus is Caldwell’s fifteen-year-old son, Peter. Brilliantly conflating the author’s remembered past with tales from Greek mythology, John Updike translates Chiron’s agonized search for relief into the incidents and accidents of three winter days spent in rural Pennsylvania in 1947. The result, said the judges of the National Book Award, is “a courageous and brilliant account of a conflict in gifts between an inarticulate American father and his highly articulate son.”

John Updike was born in Shillington, Pennsylvania, in 1932. He graduated from Harvard College in 1954 and spent a year in Oxford, England, at the Ruskin School of Drawing and Fine Art. From 1955 to 1957 he was a member of the staff of The New Yorker. His novels have won the Pulitzer Prize, the National Book Award, the National Book Critics Circle Award, the Rosenthal Foundation Award, and the William Dean Howells Medal. In 2007 he received the Gold Medal for Fiction from the American Academy of Arts and Letters. John Updike died in January 2009.

“A brilliant achievement . . . No one should need to be told that Updike has a mastery of language matched in our time only by the finest poets.”—Saturday Review