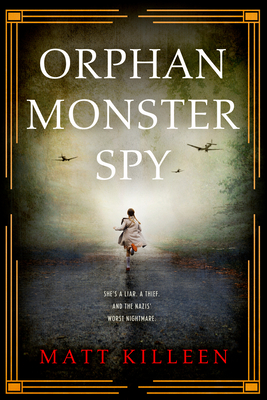 “I opened this book at 9:00 a.m. and closed it at 4:15 p.m. after turning the last page. At times, I felt like my eyeballs just couldn't move as fast as I wanted to be reading. As much of a page-turner as this is, it also delivers a real sense of history and an empowered and empowering 15-year-old heroine who has suffered yet never gives in to fear or hopelessness. It's like Harry Potter meets James Bond in Nazi Germany, starring a Jewish orphan who just keeps kicking butt.”
— Nina Barrett, Bookends & Beginnings, Evanston, IL

After her mother is shot at a checkpoint, fifteen-year-old Sarah finds herself on the run from the Nazis in Third Reich-ruled Germany. While trying to escape, Sarah meets a mysterious man with an ambiguous accent, a suspiciously bare apartment, and a lockbox full of weapons. He's part of the secret resistance against the Reich, and he needs her help.
Sarah is to hide in plain sight at a boarding school for the daughters of top Nazi brass, posing as one of them. She must befriend the daughter of a key scientist to gain access to the blueprints for a bomb that could destroy the cities of Western Europe, and steal them.
Sarah may look like the rest of the girls, innocent, blonde-haired, and young, but she refuses to become one of the monsters she's surrounded by. She's a brilliant con artist, convincing them she's one of them even as she lives in terror of being found out. And she's determined to get her revenge on them all.
Matt Killeen was born in Birmingham, in the UK, back in the war-mad seventies--a hometown largely demolished and rebuilt in his lengthy absence. People tend to dismiss what comes more easily to them as unworthy, so it took him far too long to realize he was a writer. He worked as an advertising copywriter and largely ignored music and sports journalist in the noughties, before fulfilling a childhood dream to join the LEGO® Group in 2010. He left after eight years, and an unconscionable amount of money spent in the staff store, to become a full-time author. A lover of costume parties, he is an avid gamer, soccer fan, toddler wrangler and warrior for truth and social justice. Although a devout urbanite, he has somehow ended up surrounded by fields in a house full of LEGO® bricks and musical instruments, with his two diversely aged children, Nuyorican soul mate and neurotic fluffy dog. Orphan Monster Spy was his debut novel and he has still not learned to touch-type.
“A stunning, smart, grounded tale of intrigue in Nazi Germany, so guilty and detailed it feels like true memory rather than fiction. Sarah is an angry, appealing, heart-wrenching hero, superhuman and achingly frail in equal measure. I wish I’d written this myself. Deeply disturbing and chillingly good.”—Elizabeth Wein, New York Times bestselling author of Code Name Verity

“I found myself mesmerized by Sarah’s journey into a world of human monsters. Orphan Monster Spy weaves one heroine’s courage through a spectrum of darkness, and the effects resonate long after the final page.” —Ryan Graudin, award-winning author of the Wolf By Wolf duology

“Killeen expertly conjures the day-to-day evil of Nazi Germany in this terrific page turner.”—Paul Dowswell, award-winning author of The Auslander

"A powerful, bleak, and penetrating portrait of an isolated young woman excelling in unimaginable danger."—Kirkus Reviews