The Unbelievable Oliver and the Sawed-in-Half Dads (Paperback) 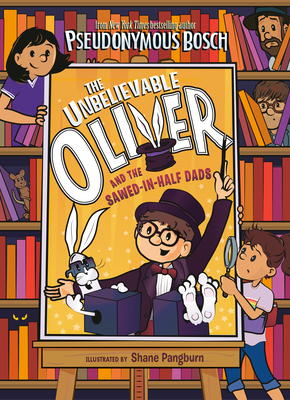 The Unbelievable Oliver and the Sawed-in-Half Dads (Paperback)

This is book number 2 in the The Unbelievable Oliver series.

In this second hilarious installment of the series that Kirkus called "ridiculous fun," Oliver is performing at a wedding rehearsal when one of the grooms goes missing in the middle of his magic act!

Oliver is new to the magical arts. In fact, he has only performed one act so far, and that one was interrupted by a theft-in-progress that he, his friends the twins Teenie and Bea, and his wisecracking rabbit, Benny, managed to thwart. Now Oliver has been hired for an even more important gig: a wedding. Teenie and Bea's fathers are finally getting married, and Oliver is supposed to entertain at the rehearsal brunch. He has chosen the classic sawed-in-half trick, which will be especially amusing when he calls up the grooms as volunteers. What could go wrong? Except that weddings are supposed to be about bringing people together, not splitting them up . . . and before the trick is over, one of the fathers will have disappeared. Luckily, Oliver seems to be a better sleuth than a magician!
Pseudonymous Bosch is the infamously anonymous author of the New York Times bestselling Secret Series and the Bad Books. Despite rumors to the contrary, his books are not actually written by his pet rabbit, Quiche. Nor is he the alter ego of Raphael Simon, a totally unrelated author who lives in Pasadena, CA, with his husband and twin daughters.

Shane Pangburn grew up in rural Illinois and now lives in Los Angeles with his wife and child. He produces YALLWEST, the nation's largest youth and young adult literary festival. His cartoons and illustrations have appeared in The Daily Dot, numerous college textbooks, and how-to guides. He worked as a children's bookseller and textbook illustrator before switching to literary promotion, assisting other authors on their book campaigns.

"Readers will be as wowed as the wedding guests." —Booklist

"With tongue stuffed in his cheek, Bosch builds the silliness with total seriousness, forces of nature Bea and Teenie making them a delightful foil for the earnest, slightly anxious Oliver . . . A fun and funny follow-up that celebrates the magic of family and community." —Kirkus