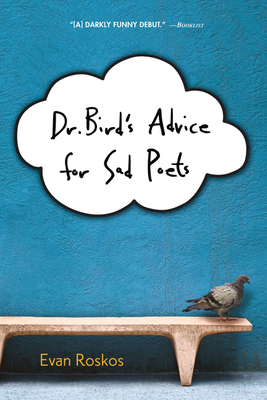 * “Self-deprecating humor abounds in this debut novel that pulls no punches about the experience of depression and anxiety for its teen protagonist. . . . Captivating introspection from a winning character.”—Kirkus Reviews, starred review

Sixteen-year-old James Whitman has been yawping (à la Whitman) at his abusive father ever since he kicked his older sister out of the house. James’s painful struggle with anxiety and depression—along with his ongoing quest to understand what led to his sister’s exile—make for a heart-rending read, but his wild, exuberant Whitmanization of the world and keen sense of humor keep this emotionally charged novel buoyant. A Morris Award Honor Book.

Evan Roskos’s story “Conspiracy of Males” was chosen by Granta for their New Voices online feature. Narrative named him one of their 20 Best New Writers. He has had stories in Best Fiction, StoryQuarterly, The Hummingbird Review, and other journals. He attended the Bread Loaf Writer's Conference and completed his MFA at Rutgers University Newark in 2009. Visit his website at evanroskos.blogspot.com.
"Roskos has created a character that does not necessarily change throughout the book, but learns to live with himself as he is, to celebrate himself and those around him even as flawed as they are."
—VOYA, 4Q 3P S

"Self-deprecating humor abounds in this debut novel that pulls no punches about the experience of depression and anxiety for its teen protagonist . . . Captivating introspection from a winning character."
—Kirkus, starred review

"Author Roskos's strength lies in his refusal to tidy up the mess in James's life and in his relentless honesty about surviving with depression and anxiety."
—Horn Book

"Roskos effectively sketches James as a boy who is far more comfortable inside his own head than in connecting with others . . . Bravely facing real sorrow, James confronts his problems with grace and courage."
—Publishers Weekly

"Roskos' first novel is rich with hilarity and realistic inner dialogue . . . Give this darkly funny debut to fans of Stephen Chbosky's The Perks of Being a Wallflower."
—Booklist

"Many teen readers will recognize their own mood swings as they are amplified through James' pendulum, and they'll be enlightened by his revelation that life can be possible and rewarding even when it's really hard."
—Bulletin of the Center for Children's Books