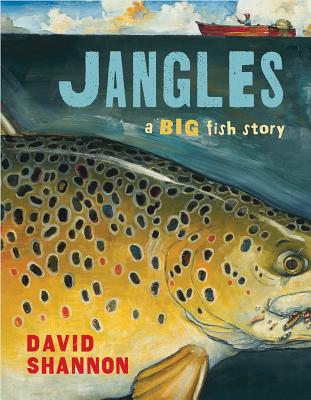 Breathtaking oil paintings bursting with energy pull
readers along into Big Lake, the home of Jangles, the
biggest fish anyone has seen. Fishing alone at dusk,
a boy feels a tug on his line and comes face-to-face
with the gigantic trout--whose enormous jaw is covered
with so many lures and fish hooks that he jingles and
jangles when he swims. Terrified by the sight, the boy is
shocked when Jangles befriends him and takes him on an
adventure to the bottom of the lake. A surprise ending
will leave readers laughing and shaking their heads. Here
is Shannon at his very best-in a wild and witty story that
begs repeated reading.

David Shannon is the internationally acclaimed creator of more than thirty picture books, including No, David!, a Caldecott Honor Book and his second New York Times Best Illustrated Book of the Year, and three more David picture books. Shannon's bestsellers include A Bad Case of Stripes, Duck on a Bike, and his recent Bugs in My Hair. He lives in California with his family.