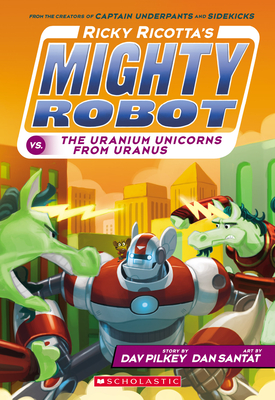 Ricky Ricotta loves his Mighty Robot. They do everything together, but it's sometimes hard for a small mouse to have such a big buddy! If only the Mighty Robot could find someone his own size to play with, Ricky might finally have some fun by himself.

Little does Ricky know, his wish is about to come true. Evil Uncle Unicorn has a top-secret plan to trap the Mighty Robot so that he can take over Earth, and he's got a giant surprise in store. Once again, it's up to Ricky to save the planet -- and his best friend!

"This reboot... offer[s] a new generation of readers a fun introduction to chapter books... Newly independent readers and Pilkey fans alike will not be disappointed by the humorous ride." --School Library Journal

"Aimed at a younger audience than the wildly popular Captain Underpants books, this series... has all the classic Pilkey hallmarks: comic book panels, superhero action, and flip-o-rama." --Booklist