Elephant in the Dark (Hardcover) 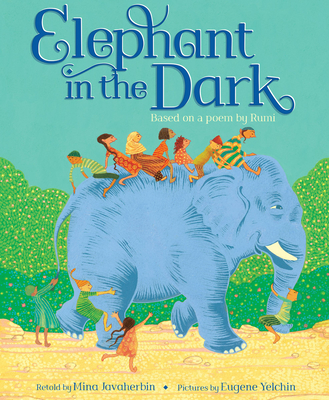 By Mina Javaherbin, Eugene Yelchin (Illustrator)
$17.99
Not in Stock - Usually Ships in 1-5 Days

When the villagers hear of a huge and mysterious creature that has come all the way from India, they steal into the dark barn to find out what it is.

Who is right? Which of them knows the creature's true shape?

Mina Javaherbin was born in Iran and immigrated to the U.S.A. long ago. She is fluent in both Persian and English. She now lives near a beach in Southern California with her husband and two children. This is her second picture book based on a poem by Rumi. Visit Mina at www.minajavaherbin.com.

Eugene Yelchin loves to create books that explore the boundaries of universal truth. He is the author and illustrator of the Newbery Honor book Breaking Stalin's Nose, as well as many award-winning picture books. He lives in Topanga, California with his wife and their two children. Visit Eugene at www.eugeneyelchinbooks.com.

Praise for Elephant in the Dark:

"The book should provide opportunities for rich discussions about perception and
about advocating for what you believe to be true." -- Horn Book

"This handsome picture book's intriguing title will grab children, and they won't be disappointed with the twists in both story and message...Both the richly detailed scenes and story reversals will draw a young audience." --Booklist

"After the first suspenseful reading, children should clamor for repeats." --Publishers Weekly

"This heart-tugging picture book from a debut author tells a lyrical soccer story in the voice of a young boy in a South African shantytown." --Booklist

* "This brief novel gets at the heart of a society that asks its citizens, even its children, to report on relatives and friends. Appropriately menacing illustrations by first-time novelist Yelchin add a sinister tone." --The Horn Book, starred review

"Yelchin's graphite illustrations are an effective complement to his prose, which unfurls in Sasha's steady, first-person voice, and together they tell an important tale." --Kirkus Reviews

"Yelchin skillfully combines narrative with dramatic black-and-white illustrations to tell the story of life in the Soviet Union under Stalin." --School Library Journal