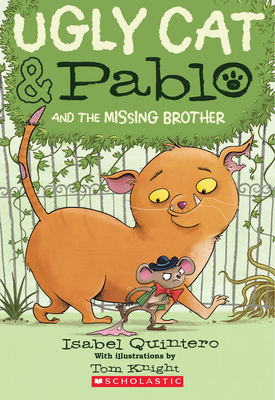 By Isabel Quintero, Tom Knight (Illustrator)
$6.99
On Our Shelves Now

Ugly Cat was supposed to meet up with his brother Tamarindo so that they could go on a search for the best albondigas (meatballs) in the neighborhood, but then Tamarindo never showed up!
Now Ugly Cat and his impeccably dressed mouse friend, Pablo, are on a mission to find Ugly's brother. But when all signs are pointing to the haunted Old Herrera House, can they figure out a way to sneak in, rescue Tamarindo, and make it out in one piece?

Isabel Quintero is the daughter of Mexican immigrants. She lives and writes in the Inland Empire of Southern California, where she was born and raised. Her debut novel, Gabi, A Girl in Pieces, was the recipient of five starred reviews and several awards, including the 2015 Morris Award for Debut YA Fiction and the Tomás Rivera Mexican American Children's Book Award. For fun she reads and writes, watches comedies, and eats paletas and chicharrones every chance she gets. Her favorite paleta flavor? Pues coco, of course.

Praise for Ugly Cat & Pablo:
"Ugly Cat and Pablo are two tough dudes with hearts of gold and a penchant for miscommunication and (mis)adventure. Pablo is a mouse who dreams of adventure; his best friend, Ugly Cat, dreams of food. When Pablo suggests an outing to the park, Ugly Cat is hooked. After all, there is always the possibility of food in an outing to the park. Sure enough, food abounds, but then they see 'THE CART.' The cart sells paletas -- the Spanish word for popsicles -- Ugly Cat's most favorite treat. An 'easy peasy lemon squeezy' plan is hatched to obtain a paleta, and from there on, it is all a series of mishaps and misunderstandings. Knight's black-and-white illustrations energetically capture the zaniness of the caper. Each protagonist speaks in a distinctive typeface, which also adds to the visual fun. The book has a liberal sprinkling of Spanish throughout; most of it will be understood by the context, but there is enough vocabulary that will be understood only by readers familiar with Spanish to make them feel extra accomplished. (There is a glossary for those who are not.) And our heroes? Well, they come out of the escapade unharmed and ready to plot their next adventure -- 'as long as we go together. And as long as there are snacks.' A series is born. Both chapter-book and reluctant readers will go for this one like cats to paletas." -- Kirkus Reviews