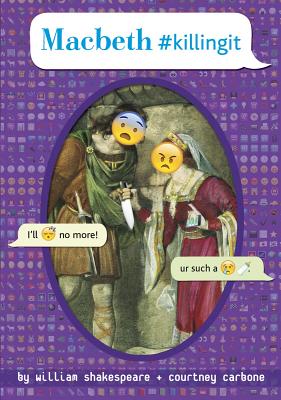 This is book number 3 in the OMG Shakespeare series.

Macbeth, one of the greatest stories ever told . . . in texts?!

Imagine: What if that tragic couple, Macbeth and Lady Macbeth, had smartphones? A classic is reborn in this fun and funny adaptation of one of Shakespeare’s most famous plays!

A prophecy from three witches.
A social-climbing couple committing a murder most foul.
A cover-up that spins way out of control.


tl;dr A Shakespeare play told through its characters texting with emojis, posting photos, checking in at locations, and updating their relationship statuses. The perfect gift for hip theater lovers and teens.

A glossary and cast of characters are included for those who need it. For example: tl;dr means too long; didn’t read.
COURTNEY CARBONE studied English and creative writing in Baltimore before moving to New York City to become a full-time children’s book editor. When she isn’t collaborating with the greatest playwright of all time, Courtney can be found studying various forms of comedy and trying to finish the joke, “Two groundlings walk into a bard. . . .”

WILLIAM SHAKESPEARE was born in Stratford-upon-Avon in 1564. He was an English poet, playwright, and actor, widely regarded as the greatest writer in the English language and the world’s preeminent dramatist. His plays have been translated into every major living language and are performed more often than those of any other playwright.