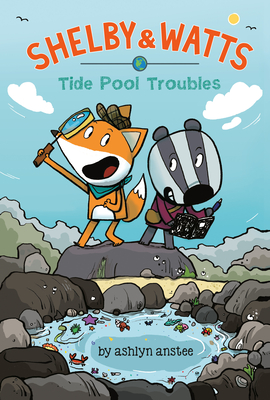 This is book number 1 in the Shelby & Watts series.

There isn't a mystery that Shelby & Watts can't solve! They're saving the environment, one case at a time.

Meet Shelby & Watts! Shelby loves a good mystery. And her best friend, Watts, is never without his encyclopedia.

When Shelby gets a letter from Fred the hermit crab claiming that all the shells are missing from the beach, she and Watts are just the duo to help him. With Shelby's deductive skills and Watts's scientific knowledge, there's no case the two of them can't solve--one environmental mystery at a time!
Ashlyn Anstee grew up in a rainy city in Canada and then settled in a sunny city in the United States with her husband and four cats. She works in the animation industry, and in her spare time, drinks tea and takes naps. She writes, draws, illustrates, animates, and is the creator of the books No, No, Gnome!, Are We There, Yeti?, and Hedgehog!. Shelby & Watts: Tide Pool Troubles is her first graphic novel.