Just Help!: How to Build a Better World (Hardcover) 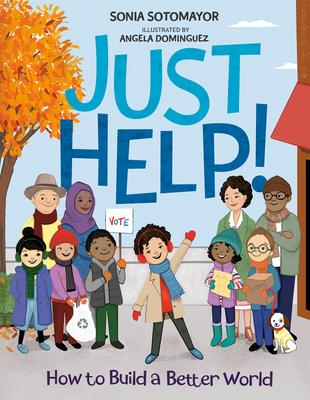 Just Help!: How to Build a Better World (Hardcover)


Coming Soon - Available for Pre-Order Now
From the author of the #1 New York Times bestseller Just Ask! comes a fun and meaningful story about making the world--and your community--better, one action at a time, that asks the question: Who will you help today?

Every night when Sonia goes to bed, Mami asks her the same question: How did you help today? And since Sonia wants to help her community, just like her Mami does, she always makes sure she has a good answer to Mami's question.

In a story inspired by her own family's desire to help others, Supreme Court Justice Sonia Sotomayor takes young readers on a journey through a neighborhood where kids and adults, activists and bus drivers, friends and strangers all help one another to build a better world for themselves and their community.

With art by award-winning illustrator Angela Dominguez, this book shows how we can all help make the world a better place each and every day.

"Generosity proves contagious in this personal portrait of community service by Supreme Court Justice Sotomayor." --Publishers Weekly
Sonia Sotomayor was born in the Bronx, New York. She earned a BA from Princeton University and a JD from Yale Law School. She served as Assistant District Attorney in New York County, and then as a litigator at Pavia & Harcourt. In 1991, President George H. W. Bush nominated her to the US District Court, Southern District of New York. In 1997, President William Jefferson Clinton nominated her to the US Court of Appeals for the Second Circuit. President Barack Obama nominated her as an Associate Justice of the Supreme Court on May 26, 2009, and she assumed this role August 8, 2009, becoming the first Latina to ever hold such a high position. She is the author of Just Ask, Turning Pages, My Beloved World, and The Beloved World of Sonia Sotomayor.

Angela Dominguez (angeladominguezstudio.com) was born in Mexico City and grew up in the great state of Texas. She is also the author and illustrator of several books for children and a two-time recipient of Pura Belpré Illustration Honor. Her debut middle grade novel, Stella Díaz Has Something To Say, was a New York Public Library and a Chicago Public Library 2018 pick for Best Books for Kids, Sid Fleischman Award winner, and an ALA Notable. When Angela is not in her studio or visiting schools, she teaches at the Academy of Art University, which honored her with their Distinguished Alumni Award in 2013. You can follow Angela on Twitter @andominguez and on Instagram @andominguezzzz.
Praise for Just Help!: