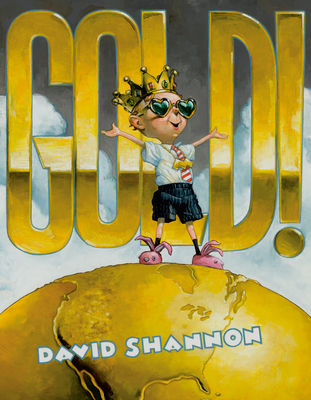 A riotous retelling of the Midas myth by the Caldecott Honor-winning and #1 New York Times bestselling author of No, David!

Maximilian Midas was a peculiar little boy.
He didn’t much like chocolate and he didn’t play with toys.
The first word that he uttered when he was one year old
Wasn’t Mama, wasn’t Papa; what Maxie said was, “Gold!”

Max Midas isn’t like the other kids. Instead of trying to make friends, he decides to make millions and spends it all on what he loves best: GOLD. Gold statues. Gold fountains. Piles and piles of gold, and atop them all, a golden castle. But one day, things get lonely inside his shiny castle and Max finally learns that gold isn’t worth anything without friends and family by your side.

David Shannon, the Caldecott Honor—winning and New York Times bestselling author of No, David!, is back with a riotous romp that’s sure to be a beloved classic.
David Shannon is the internationally acclaimed author and illustrator of thirty-five books for children, including No, David!, a Caldecott Honor Book and his second New York Times Best Illustrated Book of the Year, and four more David picture books. Shannon's bestsellers include A Bad Case of Stripes, Duck on a Bike, and Too Many Toys. He lives in Southern California with his family.