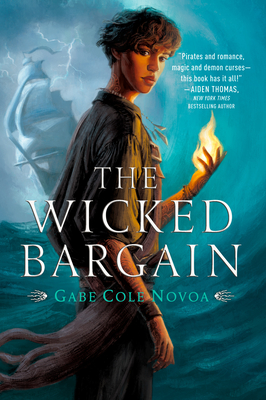 
Coming Soon - Available for Pre-Order Now
El Diablo is in the details in this Latinx pirate fantasy starring a transmasculine nonbinary teen with a mission of revenge, redemption, and revolution.

On Mar León de la Rosa's sixteenth birthday, el Diablo comes calling. Mar is a transmasculine nonbinary teen pirate hiding a magical ability to manipulate fire and ice. But their magic isn't enough to reverse a wicked bargain made by their father, and now el Diablo has come to collect his payment: the soul of Mar's father and the entire crew of their ship.

When Mar is miraculously rescued by the sole remaining pirate crew in the Caribbean, el Diablo returns to give them a choice: give up their soul to save their father by the harvest moon, or never see him again. The task is impossible--Mar refuses to make a bargain, and there's no way their magic is a match for el Diablo. Then Mar finds the most unlikely allies: Bas, an infuriatingly arrogant and handsome pirate--and the captain's son; and Dami, a gender-fluid demonio whose motives are never quite clear. For the first time in their life, Mar may have the courage to use their magic. It could be their only redemption--or it could mean certain death.
Gabe Cole Novoa (he/him) is a Latinx transmasculine author with an MFA in Writing for Children who writes speculative fiction featuring marginalized characters grappling with identity. When he isn't being nerdy at his day job or buried under his TBR pile, you’re likely to find him making heart-eyes at the latest snazzy outfit he wants to add to his wardrobe. Gabe is the author of the Beyond the Red trilogy, written under a former pseudonym. He also runs a popular writing-focused YouTube channel, bookishpixie, and is active on Twitter. @thegabecole

"Pirates and romance, dangerous magic and demon curses — this book has it all! THE WICKED BARGAIN is an immersive, vibrant adventure with swashbuckling, secrets and deals with a devil. Come for the epic fantasy adventure in the Caribbean, stay for the diverse cast, romantic tension and heart-warming found family!" --Aiden Thomas, New York Times bestselling author of Cemetery Boys

★ “Novoa’s story celebrates identities often othered in our world by representing them as ordinary here. A lineup of Latinx characters, gender-fluid demonio, and slow-burning romance beautifully round off this fantasy.” —Booklist, starred review

Dog-lovers rejoice! Through this Southern California-based cinematic thriller, T. Jefferson Parker explores the unbreakable bonds between dog and human partners. Throw in the DEA, the Mexican Mafia and one kick-ass journalist who’’ll stop at nothing to keep her stories factual, believable and inspiring. Oh, by the way the dog’s name is Joe.