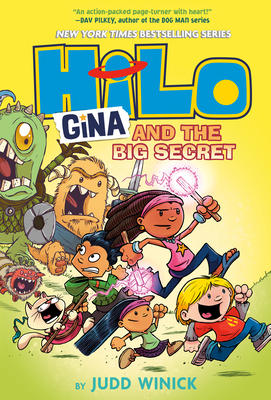 This is book number 8 in the Hilo series.

Your favorite characters are BACK and on an EPIC quest to save the world in the newest book in the New York Times bestselling graphic novel series that kids and critics love!

There's a NEW Earth! The world's timeline has been turned upside down, and now magical creatures are EVERYWHERE. Gina has to fix things--FAST!

With DJ and HILO's help, can Gina find the key to turn the world back to what it was? Find out in Hilo 8--a laugh-out-loud, action-packed adventure filled with epic battles! True friendship! Good jokes! Bad jokes! Giant (hilarious) monsters! Spoiled royals! Prophecies! Good! Evil! And much, much more!
JUDD WINICK is the creator of the beloved New York Times bestselling Hilo series. Judd lives in San Francisco with his wife and their two kids. Judd has written bestselling comic book series, appeared as a cast member of MTV's The Real World: San Francisco, and is the author of the acclaimed graphic novel Pedro and Me, about his Real World friend, AIDS activist Pedro Zamora. Visit Judd and Hilo online at juddspillowfort.com or find him on Twitter at @JuddWinick.