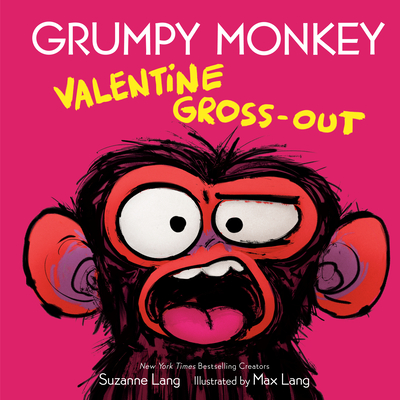 
Available to Order from Our Warehouse
NEW YORK TIMES BESTSELLER • The beloved character Jim Panzee is very grumpy about Valentine’s Day until his buddy Norman shows him that the holiday is for everyone. Two pages of full-color stickers are included for extra fun!

This holiday hardcover book is brimming with the same silly humor that characterizes all the beloved titles in the bestselling Grumpy Monkey series.

When Jim Panzee hears Oxpecker cooing over her doting boyfriend on Valentine’s Day, he has just one thought: Gross. But Jim finds out that not everything about Valentine’s Day is hearts and kisses. Jim learns there are different types of valentines and many kinds of love, such as love for a parent or for friends.

Look for more holiay fun with Grumpy Monkey Don't Be Scared.
Suzanne Lang is the author of the New York Times bestselling Grumpy Monkey books as well as several other titles. When she’s not writing books, Suzanne writes for animation. When she’s not doing that, she hangs out with her very funny kids, feeds her many pets, and tries (but usually fails) to take a nap!

Max Lang has illustrated over 20 books including all of the books in the Grumpy Monkey series. When he is not making books he makes films. He has co-directed several animated films including The Snail and the Whale, Zog, Room on the Broom, and The Gruffalo. He has received a BAFTA, two Emmys, two Oscar nominations, and many other honors for his film work. In his spare time he tries to make his kids laugh with dad jokes, and when he inevitably fails, he takes his dogs for a walk.

Joyful celebration on each Sunday (Domingo) as the family gets together for dinner at Abuelita's house and young Alexandra bravely tries to speak Spanish. This is such a wonderful book to share!