The Secret Service of Tea and Treason (Dangerous Damsels #3) (Paperback) 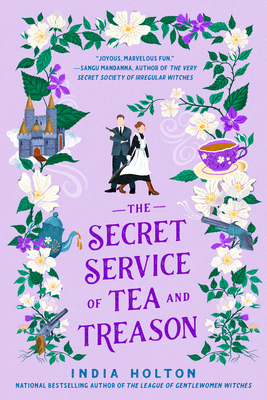 The Secret Service of Tea and Treason (Dangerous Damsels #3) (Paperback)

This is book number 3 in the Dangerous Damsels series.

Two rival spies must brave pirates, witches, and fake matrimony to save the Queen.

Known as Agent A, Alice is the top operative within the Agency of Undercover Note Takers, a secret government intelligence group that is fortunately better at espionage than at naming itself. From managing deceptive witches to bored aristocratic ladies, nothing is beyond Alice’s capabilities. She has a steely composure and a plan always up her sleeve (alongside a dagger and an embroidered handkerchief). So when rumors of an assassination plot begin to circulate, she’s immediately assigned to the case.

But she’s not working alone. Daniel Bixby, otherwise known as Agent B and Alice's greatest rival, is given the most challenging undercover assignment of his life— pretending to be Alice’s husband. Together they will assume the identity of a married couple, infiltrate a pirate house party, and foil their unpatriotic plans.

Determined to remain consummate professionals, Alice and Daniel must ignore the growing attraction between them, especially since acting on it might prove more dangerous than their target.
India Holton lives in New Zealand, where she has enjoyed the typical Kiwi lifestyle of wandering around forests, living barefoot on islands, and messing about in boats. Now she lives in a cottage near the sea, writing books about uppity women and charming rogues, and drinking too much tea.

"The Secret Service of Tea and Treason was everything I wanted and everything I didn’t know I needed. No one writes like India Holton–and I have never met a more  immersive read! This Victorian romcom absolutely sparkles! It was tenderly strong, hilariously romantic, and deliciously steamy. A pitch perfect addition to this fantastical series!"—Sarah Adams, author of The Cheat Sheet