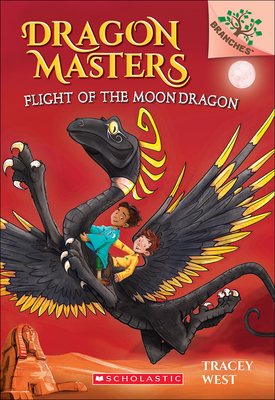 This is book number 6 in the Dragon Masters series.

Pick a book. Grow a Reader
This series is part of Scholastic's early chapter book line, Branches, aimed at newly independent readers. With easy-to-read text, high-interest content, fast-paced plots, and illustrations on every page, these books will boost reading confidence and stamina. Branches books help readers grow
In book #6, the Dragon Masters have to save the prime Dragon Stone -- or they will lose their connections to their dragons forever The Dragon Masters travel to the Land of Pyramids in search of the secret Pyramid of the Seven Dragons. There are several puzzles they'll need to solve in order to reach the hidden stone. Will the Dragon Masters find the prime Dragon Stone in time?

Tracey West has written more than 200 books for children and young adults, including the following series: Pixie Tricks, Hiro s Quest, and Dragon Masters. She has appeared on "The New York Times" bestseller list as author of the Pokemon chapter book adaptations. Tracey currently lives with her family in New York State s Hudson Valley. She can be found on twitter at @TraceyWestBooks.

Damien Jones spent his childhood daydreaming and drawing. He attended the Arts Institute of Bournemouth where he gained a BA Hons in Animation Production. He worked as an animator on films like the Oscar-nominated feature film "L'illusionniste" (2010) before begin his career in book illustrating. He has worked with publishers such as Simon & Schuster, Random House, and Scholastic. He lives in Cornwall, UK with his family."